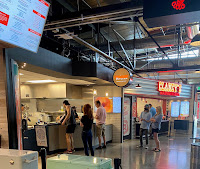 The kids and I are on summer break and we had to run an errand downtown so it seemed like a fitting time to go check out the Garage Hall at Bottleworks. I had walked through it recently, and was impressed and was looking forward to trying a few things. I have two teens, and they were both impressed with the “coolness” of the place and said it felt like it was in a different city so that’s probably the ultra teen compliment.

We all agreed to get different things so we could try lots of stuff. My daughter got an arepa and fresh squeezed juice from Azucar Morena, I got a lobster roll from J’s Lobster and Fish Market and my son got chicken tikka masala and naan from Chapati. 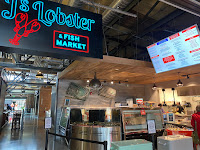 Everything we had was good, but I think we all agreed that we liked my son’s tikka masala ($14) the best of everything we had. The enthusiasm of the son working in the front talking about his mom’s cooking was awesome—he also told my son it would take a few minutes because they really are making things pretty fresh. It was a very generous portion (my husband happily finished it for lunch the next day). It had more unique flavors than your typica tikka masala. The naan was some of the best I have --much more flavor than naan often has  —my son liked watching them cook the naan against the oven walls. It was very cool to be part of their “soft open” and I would highly recommend. 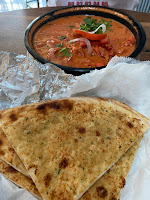 My lobster roll ($18) is the classic variation of a lobster roll. They use toasted bread, which if I am honest, was one of the best parts—it was delicious. Perfectly toasty and crisp and buttery. The lobster was cooked just right and was tender and there was just a touch of mayo, some shredded lettuce and melted butter and Old Bay on top. I would have loved a squeeze of lemon and was surprised they didn’t even have lemon wedges available, but you know me and my love of acid. The quality of the seafood was great and you can’t really go wrong with buttery lobster, although you could make it really sing with a squeeze of lemon (just saying). I like the way they serve the whole thing on top of chips—some seasoned and some plain. Definitely worth having if you are a lobster fan! 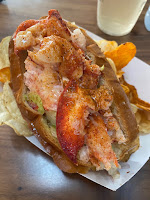 My daughter had the domino arepa ($9) which is a little Venezuelan sandwich made with corn meal instead of flour—it was stuffed with black beans, white cheeses and butter and then had a guacamole type spread as well. It was tasty too—although hard to eat like a sandwich because the fillings were kind of falling out. Again, I would have squeezed a little lime on it if I had been at home, but the ingredients were good and I like the slight sweetness from the bread. She also had a fresh squeezed juice with pineapple, orange and passion fruit. It was delicious. Slightly expensive but a very large size and extremely good (she developed a taste for the “POG” in Hawaii and has a hard time finding it).

Overall, it was a great experience and I look forward to going again—there’s a fish and chips spot we want to try and a poke place as well. Not to mention burgers and tacos and oysters as well as things I am surely forgetting. So, if you have had something that really blew your mind please comment and let me know what it was. 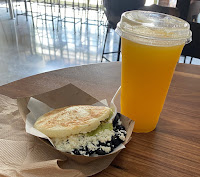