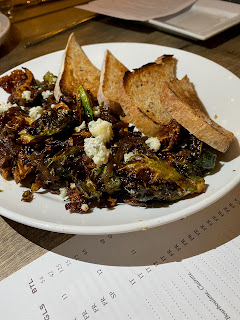 Recently a friend invited us to go to Tinker Street. I haven’t been there for several years—which is true of a lot of places lately--whole pandemic and all. We’re back to going out a little bit more widely now.

Anyhow, we started with the Brussels sprouts ($17), the chicken and caviar ($27) and the cured tuna ($18) (there were 5 of us). All of these dishes were very good. The Brussels sprouts were honestly some of the best I have ever had I think. There were the sprouts, caramelized onions, hazelnuts, Point Reyes blue cheese, preserved lemon-thyme vinaigrette and then served with multigrain toasts. I really liked the blue cheese with it and the tangy vinaigrette. Actually, we ended up having a second order with dinner. 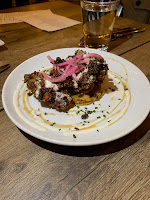 The fried chicken thigh was also so good I ended up ordering another one to have on my own for dinner (with some more of those Brussels sprouts). It was fried just perfectly and served with a hoecake, caviar and pickled onions. It was drizzled with crème fraiche and some jalapeno honey. Seriously, what a great bunch of flavors. Again, I was so sad about only having a small bite of the shared one, that I went ahead and just ordered it again for my dinner. It’s an appetizer, but it is pretty filling. 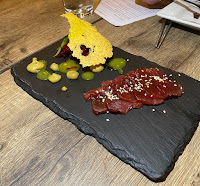 I enjoyed the tuna myself, but others didn’t like it as much as the other items. It was cured with smoked soy so it had a little different texture than most tuna crudo type things that you might taste, but I enjoyed it. It was served with yuzu gel, avocado puree and a slaw made with pickled beets. I liked all of it except for the beets, which I never like.

My husband had the pork belly ($26), which is one of the classic items they have had at Tinker Street since the beginning. He said it was good, but I think he enjoyed the apps better. To be honest, I think they sounded better overall than the entrées and I will likely always order from this part of the menu. 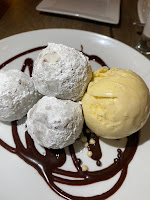 We also had the doughnuts for dessert ($11). They are ricotta doughnuts with maple ice cream. They were also very good. Generally, I find you can’t go wrong with doughnuts. We also had the s’mores bar ($11) which was also really good—it had a chocolate custard and marshmallow cream that was seared on top to give it that campfire taste—and it had an ash dust alongside There was a graham cracker crust too. Also, really good. I do have a weakness for singed marshmallow.

It was a very good meal and I was glad we got to go back. We will certainly add it back into the rotation.  Just remember, it’s 21+ and they now take reservations.