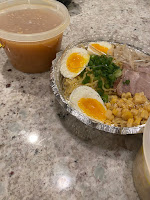 Since COVID and quarantining began, we have developed a pretty regular list of places we get carry out from on a regular basis. Ramen Ray is one of these. They do a great job with carry out and even though it has to use a few more containers than is ideal, by keeping the noodles and everything else separate from the broth, it keeps the perfect consistency of the noodles and the eggs don’t get overcooked. And if I want to heat the broth up separately for a minute when I get it home to make it a bit warmer, I can easily do that too. My only complaint is they aren’t open Sunday nights which always seems to be the night we want ramen. They also do delivery through some of the third party services.

My regular order is a half order of miso ramen with an extra egg and chopped pork. The noodles are tender and great, the eggs are perfect and I really enjoy the chopped-up pork over the big slabs of pork which are more challenging to eat with a spoon and chopsticks. Hubby also gets the miso—sometimes a full order, sometimes half, depending on his mood. There is a spicy miso option as well, but last time I had it, it was so spicy, it was almost too much. 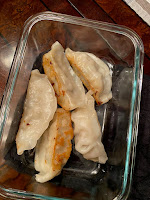 The kids both prefer the shoyu, which is a soy sauce type broth—and they also get an extra egg—which gives you three halves…just the right amount if you ask me. We also usually get at least one order of dumplings—you can get pork or veggie—we always get the pork. They are lightly pan fried and I like the vinegar/soy dipping sauce to give a little bite of acid to go with the rich ramen.

All in all, a solid experience—and the guy in there is starting to recognize me which shows you how much we get it. One of the things I like about it, is that it is carry out that isn’t pizza or fried food and feels a little healthier. So, let me know what your favorite slightly “healthier” options are these days. 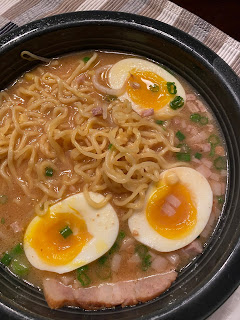 Actually, please tell me new and unusual places you have found good carry out. I need some new inspiration---but something I can carry out. At least for now. 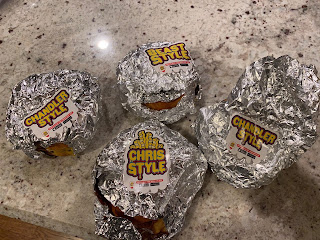 I have two teenagers in my house and a son that loves watching YouTube. Both my kids were intrigued to try this food that apparently was created by a guy who is a famous youtuber and somewhat of a wacky philanthropist/entrepreneur. Apparently, he makes a lot of money and likes to give it away in unique ways. That is about all I know. Oh, and that when he started this delivery/pick up only restaurant concept recently that he often gave wads of cash with the orders. It’s been a few weeks now since he started the “pop up” type kitchens  (I guess they use kitchens of other restaurants) around the country and so now you just pay for your food and don’t get the free stuff. But the kids were intrigued to try it just for the kitsch factor and I am always game.

The menu is pretty straightforward—3 styles of burgers topped with different things, some chicken fingers and chicken sandwiches and fries-seasoned, unseasoned and loaded. We got each of the burgers—the “Chandler,” the “beast” and the “Chris” style ($6.99-$7.99). The burgers are described as “smashed crispy beef patties” with their house seasoning and then the various toppings—the chandler being the simplest with just cheese and the seasoning. The Chris style has the “crispy” patties with cheese, seasoning, bacon and fries on the sandwich. The beast has the “crispy” patties, cheese, pickles, seasoning, brown mustard, ketchup, mayo and diced onions. Well, that’s what the menu said anyway. The patties weren’t really smashed crispy patties—they were just kind of regular patties. The meat was pretty tender and I did like the seasoning flavor. The cheese was nice and melty. I specifically had ordered the beast and there wasn’t any of the toppings on the burger except the pickles and cheese—no sauces or onions from what I could tell. The buns were nice because they held up well. But honestly, there was nothing about this burger that really made it stand out. I liked the minimal packaging, but when you are expecting a crispy thin burger, this was a little disappointing. It was a fine burger and traveled decently. That’s about it—it was fine. 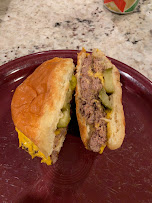 The fries were pretty disappointing They are crinkle fries ($3.25), which are never my favorite, and you can get them seasoned or unseasoned—the seasoning is described as red pepper, garlic, paprika, sugar and a touch of lime. We got some seasoned and some unseasoned and honestly, couldn’t really taste much seasoning. A couple of them appeared seasoned, but that was pretty much it.  They were pretty soft, even after my patented re-heat in a hot oven to crisp them up (I do this with all carry out fries since we started getting a lot more carry out during COVID). My favorites of the fries were the loaded “beast style” fries ($4.99). They weren’t all that loaded, but had some American cheese melted on top and were drizzled with mustard, ketchup, mayo and diced onions. I think there were also supposed to be pickles but they weren’t there. We also got a couple of chocolate chip cookies ($2.49)—they were tasty—not a soft bake, more of a crunchy style—but chocolatey and good.

All in all, it was fun to try and the kids were definitely intrigued. Would I order it over other local places with smash style burgers? Um, no. Let’s face it…would I order it again at all? Unlikely.  But the burger wasn’t terrible, and I appreciate that some of the profits are donated. I sort of wish they actually put the stuff on the burgers and fries as advertised… The kids seem to think that it probably won’t be around long because it is meant to be a pop-up type situation, but I couldn’t find any info about timelines so I really have no idea. 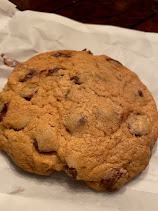 There’s not really any address

Just look on doordash or

Whatever your preferred third-party delivery service is..