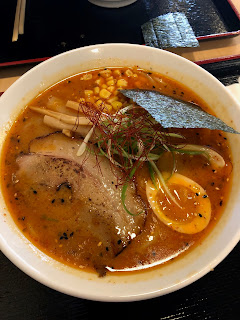 I met a friend for lunch the other day at Yujo. I am always game for a new ramen place. This is more of your quick service type of place where you order up front and then pay and they bring it to you. The interior is pretty simple and straightforward.

So their main thing is ramen and boba tea but they also offer a few other things like Japanese fried chicken and gyoza. However, we just tried the ramen. They had some interesting varieties of ramen, but we both ended up going with the spicy ramen ($13.50)—it is sort of the classic ramen that you think of—a miso and pepper-based sauce with wavy noodles, a slice of pork, a marinated egg, corn, fermented bamboo shoots, sliced scallions and charred beansprouts. There was also a garnish type piece of nori but I popped it out because I don’t like it when it starts to get kind of fishy tasting, but that’s just me. They also use some spicy chili oil on top.

This was a very solid bowl of ramen. I added an extra egg (+$1.50) because that’s just what I do. The broth was extremely flavorful and the eggs were cooked just right. I really liked the crunch from the charred bean sprouts as well. Now I know that the big slab of pork is traditional, but I had a bowl in Rhode Island that had little bits of ground pork and that was so much better to me. I hate using chopsticks to try and bite off pieces of the pork.

However, overall, a very good bowl of ramen. Plenty of noodles, plenty of flavor and some unique takes—like the bean sprouts. There are also several other options that are a little more unique—one ramen that was yuzu-infused. Another is topped with black garlic oil. There’s also a veggie ramen. All sound very worth trying.

One thing I would change/add is to offer a smaller size option for lunch and maybe make a combo like some of the other places do with a couple of gyoza or a couple of pieces of fried chicken perhaps? Because I try to eat somewhat light for lunch, and I don’t know that this place has a real going out to dinner vibe for me. Speaking of which, there’s no alcohol. Like I said, lots of boba tea if that’s your thing though.

Let me know if you’ve tried this place—especially if you have tried some of these other items. I’m intrigued!

Support our Local Restaurants...and get yourself a little something 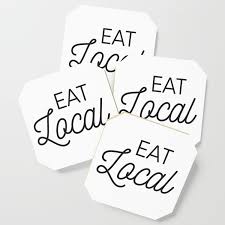 Taking a break from my regularly scheduled blog posts (new post next Monday). Support our local restaurants who are struggling right now with decreased business. You can buy a gift card, order some food to pick up curbside, or order some other goodies. Whatever you can do, please support them. Seriously, if you like any of these places, buy something from them. This is hard on all of us, but particularly service-based industries.

This is an evolving list. If you know of someone to add (or you are a restaurant that wants to be added), please let me know! 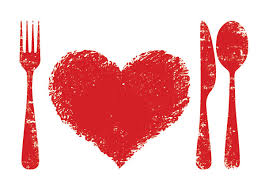 Curbside pick up: (* designates some limited delivery as well)

*Between the Bun: https://btbindy.com/ (delivery through grubhub)

*Clustertruck: https://www.clustertruck.com/ . (Use this code as a friend of Jessica for discounted first order)


Savor V (baked goods): https://savorv.com/ (with every purchase she makes a donation to IPS schools)


Other shopping (that supports restaurants):

Hey guys, just a reminder—don’t forget about Oakley’s. It is still a great option for a nice dinner out with a lot of different flavors for everyone. I know it’s outlasted so many places, and that everyone loves the hot new thing, but this place is still solid. 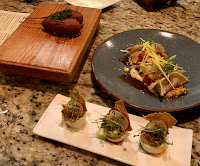 We met my sister and her husband over there the other day to save them a few miles (they live west). They seated us in the chef’s table, which was fun, but you definitely need to want to be in the action. I will start with saying I love the professionalism of the staff and their prompt service and knowledge of the menu items. My sister and hubby started with the classic shrimp corndogs ($2.75 each). They really enjoyed them. I have had them many times before but wanted to try something else. I rarely pass up deviled eggs so we had the red chile tamale deviled eggs ($5.75) and the prime rib dumplings ($13.75). Both items were very, very good. I liked the bit of heat in them with the corn, lime and cilantro flavor—there was also some smoked chicken on top making them a little more filling than most. There was a little crispy corn crisp as well—like I said, these are much more than most deviled eggs—a lot going on, but lots of great tastes. 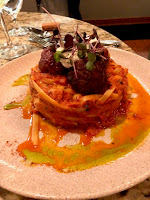 Hubby was oohing and awwing over the dumplings and they were also really good. Again, much more to them than your typical dumpling. They were full of steak, spinach and leeks, and sitting on poblano crème fraiche. Oh yeah, and topped with sweet corn pico de gallo, cotija cheese and with crispy bits of tortilla on top—again some great Mexican-type flavors and great combination of textures as well as flavors.  There are always a lot of flavor combos going on in Oakley’s dishes—sometimes it is almost overwhelming to try and figure out what’s what, but everything almost always tastes good. 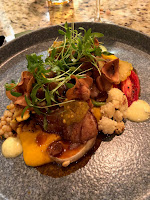 Like the next dish, which is a perennial favorite of mine. The “Toad in the hole” ($13.75) is a variation of your classic cook an egg in the hole in the toast. So this version has got your egg cooked in the hole of a piece of Brioche, but it is also topped with artichokes, prosciutto, roasted pepper and olive relish, arugula, candied walnuts, Brie, mushroom truffle and red pepper coulis. Whew! That’s a lot of stuff. And you know, you pretty much can’t even see the egg, but man is it tasty. It’s one of my favorite things at Oakley’s. You can kind of get a different flavor profile with each bite if you want to by dipping in the various sauces. But you get at least a little of the eggy bread in most bites, and that’s always a good thing.

Hubby ordered one of his regular Oakley’s favorites for dinner—the pasta with a crushed tomato sauce, roasted garlic ricotta and pancetta ($19.75). And as always, he added the chicken and artichoke meatballs (+$6.75). This is a great pasta dish that has been on the menu for a long time for good reason. I like the extra acid of the artichokes and tomatoes and the artichokes seem to help keep the meatballs moist. 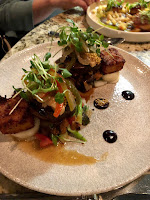 I ordered a special ($35.75) that was also really good—it was a seared tile fish filet that was topped with all kinds of things—there was carrot puree, small pasta, some aioli, roasted veggies and lots of other stuff that I have forgotten. There were olives and other acidic bite that I really liked. Again, a ton of things going on, but the fish itself was really light and  tender. 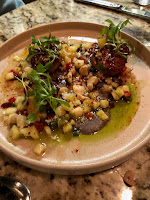 My sister had scallops ($15.75) and my brother in law the short rib ($32.75). I didn’t really try theirs so I can’t really speak to them, but they seemed to like everything they had a lot. And as always, they were beautiful.

We had a couple of desserts—the Dan’s chocolate bar ($9.75) and the special ($9.50), which was an olive oil cake with berries and a wonderful homemade raspberry sorbet. I wasn’t expecting to like the olive oil cake as much as I did, and I really liked it. Honestly, the chocolate bar is a little dense for me—extremely rich and thick. It typically comes with coconut ice cream, which neither hubby nor I really like so we substituted the roasted banana yogurt from another dish which was really good and interesting. The bar is served with some chocolate ganache, cherries jubilee, and dehydrated chocolate mousse. I did like the variation in textures—I just couldn’t eat more than a bite or two. Also, side note: Oakley's has one of the best dessert wine menus in town. 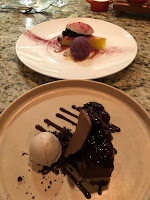 All in all, for a special night out, this is a great place to remember. There’s a lot going on in pretty much every dish, but it’s fun to try all the various flavor combinations. And the main ingredient is pretty much always prepared exactly perfectly. And it’s nice to be cared for by a professional staff who is not at all snooty. I do sort of wish the menu changed slightly more than it does, but on the other hand, I have certain favorites that I love as well.

What are your favorite items at Oakley’s?