We have been a bit in a rut with this whole Covid carry out thing…and I have been more determined to try new things. A couple of you guys recommended this place—it’s in the old Sobro Cafe location. The website is funny because it shows kind of a fancy dining area, but obviously it’s some stock images because the inside looks pretty much just like Sobro used to look if you have been there. 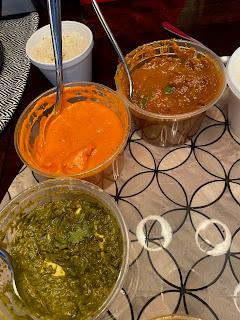 But no matter, we ordered carry out and when I went in to get it, the only people in the dining room were the owners’ kids playing on their tablets. It looks like it is a true mom and pop establishment—mom in the front and pop in the back cooking. And while there wasn’t anyone in the dining room, the phone rang off the hook while I waited to get my order—and there was a fairly constant parade of people and delivery service drivers coming in to pick up food. 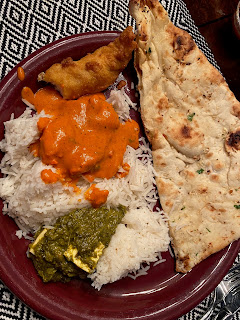 We went with our classic (and yes, I know, fairly unoriginal) order of chicken tikka masala ($12.95), palek paneer ($9.95) and lamb karahi ($12.95). I mean, we kind of have to compare it to our other stand-by Indian places to see which we like better right? We also got garlic naan ($2.75) and tried an appetizer of chicken pakora ($5.95). Please note I don’t necessarily think the pictures on the online menu are their actual food either, as the pakora looked quite different—the online looked like little chicken pieces, but in reality, they were basically like chicken finger size.

The tikka masala and the palek paneer were excellent. The chicken was tender and pretty plentiful (sometimes I feel like there is not a lot of chicken in the containers). The spice level was definitely present (it is listed as spicy on the menu) but isn’t so spicy that you don’t want to eat it—just the right amount (for my family) that slowly builds as you eat it. The palek paneer—which is basically like creamed spinach with hunks of cheese in it, was also very, very good. The spinach part of this dish was super fresh tasting—even though it was creamed spinach. I am not sure how to explain it except it was very spinach-y. There was also a lot of cheese chunks (which is my preference) although it is pretty big pieces and I like them a little smaller, which isn’t a big deal  because you can just cut them up and stir them back in.

The boys in my family are the main lamb eaters with Indian food and thought the quality of the lamb, and the tenderness was really good. They didn’t like the sauce (ginger, onions, bell peppers and spices) as much, thought it was a little bland. They are excited to try some other lamb dishes though because of the quality of the meat. We also were intrigued by the Indo Chinese dishes which have a Chinese flair to them. There were several that look really good.

The chicken pakora were a miss for all of us (the dogs felt very lucky though). There were a ton of them, but they were cooked in a chickpea batter but ended up tasting a bit like chicken in pancake batter—and didn’t re-heat that well so the crust was kind of soft.

All the entrées came with rice and the naan was solid. I mean, you can’t really go wrong with naan right? And it was tasty.

All in all, we were very happy and will definitely go back. Our go-to dishes are very good and we are excited to try some new stuff too. And always nice to support a local place like this. Who else has been and what did you like?

Ok, here’s a quick post to tell you about “Send a friend lasagna.” I heard about this service on twitter around the beginning of the pandemic, and have only continued to hear more as it goes on and on and on… I even sent one to my parents at the beginning of the lock down when we couldn’t see them as much. My parents loved it, but I just hadn’t gotten around to getting one for myself. 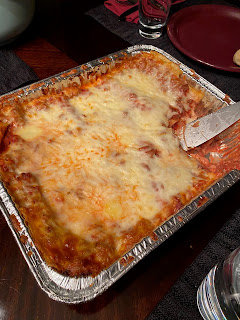 Recently, I had the opportunity to host a small group of friends who have all been vaccinated, as well as feed my own kids and family so I ordered a couple different options. We had the straight up regular one (meat, noodles and cheese) ($30), the gluten free version for a friend who cannot eat gluten ($44) and the gorgonzola lasagna ($40) for something different. I will say, I like lasagna, but I don’t get super excited about it unless it is super good—and these lasagnas qualified. Everyone really enjoyed all the versions. The straight up version is exactly what you want—just enough meat and sauce combined with the right noodle strength to hold it all together.

The gluten free was a hit with my friend who has recently learned she can’t eat gluten—and she had plenty to take home to share with her kids, one of whom also can’t eat gluten. The gorgonzola version was also very tasty too—soooo rich with lots of cheese and cream as well as ham and chicken. It didn’t hold together as well as the standard version, but it didn’t really matter because it tasted so good! But you had to eat it in small doses—I really liked a bit of both on my plate. And we ate it for several meals due to all the leftovers. 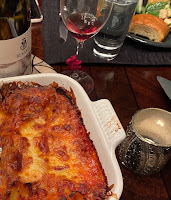 They deliver straight to your door when you need it, which is super convenient. It was a little challenging to get them all on the table at the same time, as the gluten free cooks at a higher temperature and for longer, but I made it work. I wished I would have rested the gorgonzola version a bit longer just because it seemed like it could have benefited, but ultimately, it didn’t matter because it tasted so good. And like I said, it was a meal that lasted for days. IF I wasn’t hosting others, I would just freeze smaller portion sizes for my immediate family and eat it over the course of several months. (You can easily feed at least 8 servings from one lasagna). 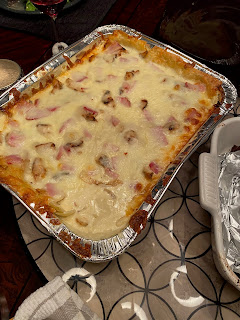 This is a great option when you want a family meal that is clearly homemade, but you don’t want to make it. Highly recommend. And there are some other flavor options if you are looking for vegetarian or just noodle-free. If lasagna is your thing, you are gonna want to try it.