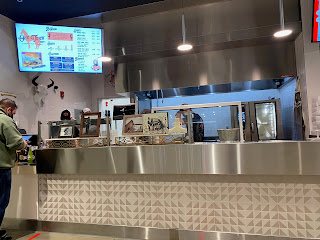 Well…several of you guys had been mentioning how good One Trick Pony burgers were and I was intrigued. You know I love a good smash burger and I figured Neal Brown could do a good job with that right?

So Friday night, I got online, planned ahead and ordered online for a 6:00 curbside pick-up to be in home in time for a hungry son who would have just been home from tennis. Well, that planning was for not. I mean, I can understand a few minutes delay….but long story (and it seemed really long), they totally lost my order, but never realized it til I sat waiting for another 15 minutes, called again and eventually just had to go in and order everything again—told that my order would be rushed and well, it wasn’t—I stood and watched as they made every order that came in in the order they ordered, even though I had ordered my food at 4:50 to be picked up at 6:00. Anyhow, I finally got my food and was out the door just before 7:00. By this point, I had some hangry people on my hands and I was just hoping the food was good. 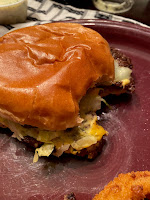 Luckily, the food was very good. I thought the burgers were great actually—and I was pretty cranky at that point. They are grinding fresh meat behind the counter (I could see it there as I waited….) and cooking them on a flat top—smashed flat and a little crisp on the edges. I had the “dandy” burger, a single ($5), and it came topped with American cheese, pickles, onions, shredded lettuce, and dandy sauce (also tomato but I went without). The buns are soft and white and just enough to hold up to the meat but not overwhelm the flavors. I love shredded lettuce on a burger, and I liked the dandy sauce, which seemed like a mayo/ketchup blend with some pickle chunks mixed in. Or something along those lines. I had a flashback to the Barking Dog burger, which was always one of my favorite burgers in town before it closed. It had a similar flavor and thickness. 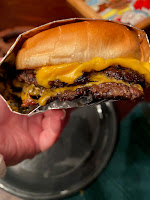 Hubby and my son had the “build your own” burgers (for my son a double with extra cheese -$9.50). My son has always gets a double with extra cheese and nothing else. Hubby got onions and bacon and the dandy sauce. Both were really good as well although I think the dandy sauce makes it. But the beef makes it too, which is obviously important. Speaking of beef though, my daughter had the impossible burger ($6), which is the only non-beef entrée offered. I was impressed with how it looked—the appearance was tasty. She was happy with it, although my son tried it as wasn’t as impressed as he was with the real beef burger, but what can you expect? But if you are vegetarian or not a beef eater, it looked like a solid option. 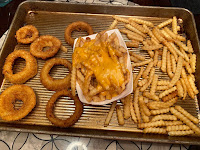 We got a taste of all the sides—they have crinkle fries ($2.95/$4.95), onion rings ($3.95/$5.95) and cheesy fries ($4.25/$6.25). We had one of each. We heated them all up a couple minutes in the oven when we got home (this is my sure-fire way to re-crisp up fried items—just don’t leave them in too long or they get too hard). I think our favorites were the onion rings. I don’t usually love really fat onion rings, but these were delicious. They were an extra crispy panko-like texture—really good. I also am not a big fan of crinkle fries and these did not change my mind, but the beer cheese on them definitely did. With that cheese sauce, I happily ate my share of fries. I really enjoyed the flavor of the beer making it unique from your typical nacho cheese. So ultimately, I would get both the rings and the cheese fries again. Maybe beer cheese on the side if we get them to go so I can crisp up the fries first and then dip in the cheese. And I look forward to eating that burger again. It’s the kind of burger that makes you keep thinking about it—and everyone at my house really enjoyed it. Oh, and the one positive about my long wait was that I spent the $10 in tokens they gave me for the Test Kitchen on cookies from the booth next door— they’re called Fat Stack cookies coming out of the Korave Korean BBQ booth. One was double chocolate cookies and cream and one was funfetti. They were huge and very tasty—especially after heating them back up a little (like I said, this has become my pandemic area of expertise—reheating carry-out food to make it shine). 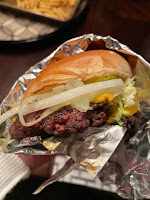 Based on my experience, I would not even try to order the burgers in advance though. I would just go in and order and wait. And some day, who knows? Maybe we’ll even eat inside. 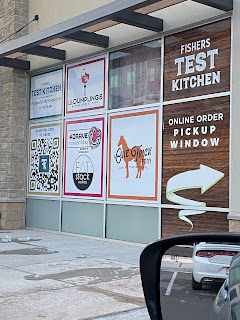 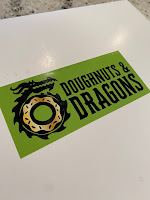 The other day I was out running errands early on a Sunday morning—my teenagers were still asleep. I was thinking I would surprise them with doughnuts, but our go-to Taylor’s isn’t open on Sundays. And I didn’t want to drive a bunch. I literally glanced around and saw Doughnuts and Dragons, which is just down the street from my house.

Honestly, I don’t know a lot about it, but it looked open and it has doughnuts in the name right? So I headed over to check it out. So I chatted with the two ladies behind the counter and they told me that they had opened just a few months before the pandemic and had built a pretty good business with the large space that serves doughnuts, craft beer and lots of board games and space to play all your games like D & D etc. They were hurt by the pandemic, and had to close down for a bit, but were back and trying to slowly build their business back up.

Anyhow, I ran in and was impressed by the looks of the doughnuts! Some interesting flavors and some decadent looking options, as well as some of your standard classics. Luckily, like I said, I had teenagers at home who will (and can) eat doughnuts all day with no ill effects, so I bought a bunch to try. I got the s’mores ($2.25 each), the chocolate iced with sprinkles ($1.75). plain glazed ($1.50) and a cinnamon sugar braid ($2.00). I got a 10% discount for ordering more than 6 as well (it’s even higher if you buy more than 12). 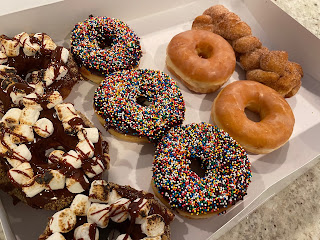 I think the favorite among everyone who tried them was the s’mores. We are also a family who loves s’mores things and this one was done well—sometimes marshmallows turn too hard or chewy but these were just lightly singed but still soft. The chocolate on this one as well as the chocolate iced was soft and rich and tasted freshly made—speaking of which, they do make them all fresh in house. The chocolate icing is very fudgy, not as much like a hard icing you might get other places. The more basic glazed and cinnamon sugar ones were also solid. If this is your favorite doughnut, I don’t think you would be disappointed. All in all, I felt like it was a nice discovery for me—especially since like I said, Sunday doughnuts are a necessity. And my daughter, who has started playing D&D since the pandemic started (something you can do online) thought it would be cool to have her friends meet there once it is safe. They also have a very large selection of craft beers if that’s your thing as well. 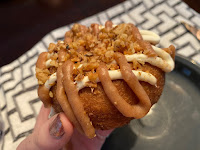 We went back a second time because my kids are sort of hooked, and hubby wasn’t home the first time we ate them. This time we got some repeats, and also ordered a butterbeer, more glazed (one of hubby’s faves), the banana nut muffin, and the cookies and cream. Honestly, hubby really liked the glazed and was very pleased. The banana nut, the butterbeer (which is like a butterscotch glazed) and the cookies and cream are actually a cake-style doughnut and had that denser consistency—they were fried so they had a little crispy crunch to them. The cookies and cream had vanilla filling in it too. Somehow, we didn’t get any cake style the first time so I was really glad to try these this time. They were all really very good. Loved the way the banana nut had the flavor of a fried banana nut muffin with icing. And a lot of nuts. 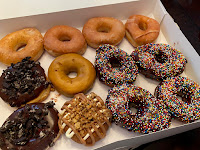 I am so happy that we discovered this place and my teenagers are gonna be there a lot I think. If you want a fancy doughnut, and maybe a beer on the side, this is your place (or even if you just want a doughnut to go). I feel for them opening in such a difficult time and they are worth a try for sure. A high-quality product. If you have been or decide to check it out, let me know what you think and your favorite flavors!