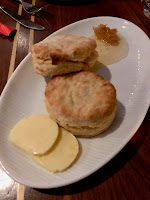 Recently hubby and I were looking around for a good date night spot and I was somewhat uninspired by the menus I was looking at. It’s partly the season and that I didn’t want anything heavy…I just wanted something lighter and brighter even though it was Fall. Spoke and Steele has been a place I keep meaning to get back to try again since I knew that Greg Hardesty had a hand in creating the menu and when I looked at the menu and the abundance of seafood on there, I was sold. 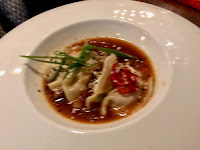 It’s an interesting menu—there are some definite Hardesty-ish menu items (remember that endive salad that came from Elements and then would pop up on the Recess menu?). And a big hearty burger. But there are also some interesting Asian influences as well as Cajun influences as well. All things that make me happy. The current head chef is Erin Gillum, which is a new name for me, but I like her ideas on paper.

At the recommendation of our server (who was very helpful and professional), we started with the biscuits with Vermont creamery slated butter and local honey ($7 for 2). Loved the creamery butter with just the right amount of salt, but I can’t say the biscuits on their own were super special. I mean, nothing wrong with a solid biscuit, but these could have used some gravy or something to really take them to the next level (maybe on the breakfast menu?). The butter and honey together added nice flavor though. We ended up just sharing one and taking the other one home. 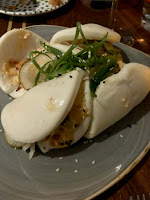 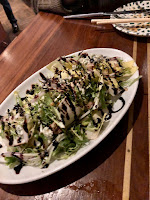 The biscuits actually came out with the lobster and shrimp potstickers ($19), which were the clear highlight of the meal for me. But this course also reminds me of one of the things I would be vocal about when ordering—the timing and spacing of items. The food came out really fast and the salad was one of the last courses, which is not what we wanted. So if you go and you would like a more spaced out meal, I would order one or two things at a time and if there is something you want to start, let them know. Anyway, back to the potstickers—so, so good. There were 5 of them, stuffed with lobster and shrimp in a light wonton wrapper that was perfectly seared on one side. The broth though—wow—full of ginger, miso and soy—and topped with some peppers. I instantly wanted a second order, but hubby restrained me. The only complaint I had about these was I wished they were just a little warmer, but even so, I inhaled them. And then we dipped our biscuit inappropriately into the broth.

The next course we got were the pork belly and shrimp bao ($16). I love a good stuffed bun, but these were a bit of a miss for us just based on execution. They were 4 large buns—2 were filled with a large piece of shrimp and 2 with a small piece of pork belly. The meat quality of both was very good—the shrimp had nice flavor and was plentiful to fill the bun. The pork, while tasty, and perfectly crisped on the outside was way too small for the large bun. There was just one small maybe two inch by two-inch piece in mine and it was dwarfed by the bun and the excessive amount of spicy mayo. These could be perfected for sure. First, the amount of filling should match the bun. So either more filling or less bun. Then, less mayo—just a drizzle would be plenty as it is very rich (I would add a little acid to this as well). And finally, while I really liked the pickled cucumbers—and they are the things that make these little buns to me—you couldn’t really taste them due to being overwhelmed by the other ingredients. But like I said, there is definitely room for improvement. And I appreciate that they are doing something different. 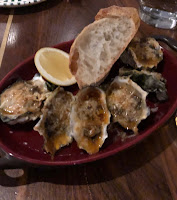 The next (and originally, we thought last) course was the endive salad ($11) and the broiled oysters ($20). Like I said, ideally, I would have liked my salad in the first course, but maybe that’s just me. The salad is described on the menu as having endive, blue cheese, candied pecans, granny smith apples and white wine vinaigrette. So the heavy drizzle of balsamic was a bit of a surprise but it was fine. You couldn’t really get much of the white wine vinaigrette flavor though. Loved the combo overall though-some of my favorite combination of things in a salad. It was well-dressed and topped with lots of goodies.

At this time we also got the broiled oysters which were 6 small oysters (I so much prefer them on the small side) topped with Cajun butter and parmesan cheese. They gave you a nice juicy piece of lemon to squeeze over them as well, which was the perfect addition. I prefer my oysters cooked, and these were cooked just right. Gave the oysters even a little more creaminess. Totally worth ordering. 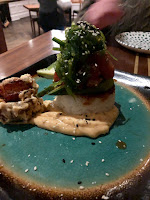 At this point we felt like we could use one more dish, and hubby was forcing me to try something new (because I really wanted more potstickers!) so we went with the “deconstructed sushi roll” ($24) from the raw section of the menu. This was interesting—it was a patty of rice that was seared on the sides like a crab cake, adding some extra texture. It was topped with some slices of avocado (would have loved a few more) and then ahi tuna marinated and cut into cubes. There were two crunchy spicy chili shrimp on the side. There was a bunch more of that spicy mayo on the bottom of the dish as well. Again, the mayo was a little over the top for me—super thick and rich, but the rest of the dish was really good. The shrimp were cooked just right and I liked the other ingredients combined together for a nice little bite.

Our server was excellent as well and knowledgeable about the menu. She also immediately brought a new bottle of wine when the one we ordered tasted off. No questions asked. I appreciate what seems to be a well-trained staff (although I would like the pacing to go just a bit slower). It's pretty loud in there when it is busy (which it was) so we were happy to be in a table near the bar without too many around us).

At this point, we felt like we had enough to eat and we were generally very pleased with dinner. There are so many things I would like to try (along with my potstickers) on future visits. I love all the shellfish on the menu---am intrigued by items like pickled shrimp with pimento cheese and the Brussels sprouts salad with crab and shrimp. Let me know if you have been and if so, what items you have tried—good or bad. I need to build my next order. 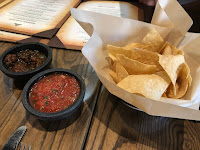 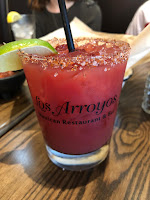 One of my son’s favorite types of food is Mexican. He has his preferred places (La Hacienda, Nada and Livery), but we are always looking for new Mexican places. Recently we tried Los Arroyos which has been open a few years but is new to us. It’s a small chain out of California and Carmel is their first location outside of the west coast. It has a little different feel than other Mexican places—a little more upscale I guess. A little on the sparse side décor wise, and we got sat facing the bus station and kitchen which always makes hubby a little grumpy. 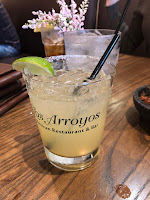 Anyhow, we got our complimentary chips and dip. I like that they give you two different salsas—one is a littler spicier than the other and has a bit of roasted flavor to it, while the other one is fresher and milder. I actually think I preferred the acidity of the fresher one but they were both fine. The chips were just meh—not warm and nothing particularly interesting about them. We started with the queso dip as well, which if I am honest was probably our favorite part. It came with chile and chorizo and once you mixed it all up was quite tasty. The homemade corn tortillas are a nice touch. Drinks-wise, hubby had a Cadillac margarita ($14) and we both thought it was good (you can also buy a margarita here that costs $350 if that’s your thing). I made the mistake of ordering a blood orange margarita ($14), which took about 3 times as long to get and which has this spicy salt mix on the rim that did not go with orange to me. It reminded me of a drink I accidentally got once that was orange juice and pepper flavor vodka. No bueno for me. I would not order this drink again just for the wait, but especially for the taste. I didn’t finish it and I switched to wine at this point. 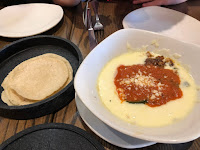 The menu looks a little more interesting than many Mexican places—I find so many just have the same 5 ingredients recycled into different tortilla formats. This one had various seafood items. Like for instance, hubby had the langostino quesadilla ($18). It was a quesadilla stuffed with three kinds of cheese, langostino lobster, caramelized onions and avocado and topped with chipotle sour cream and guacamole. Sounds intriguing right?—and all things I like. It was good, but nothing that blew your mind or anything. I could have used a little kick or a little acid with it. But not bad. 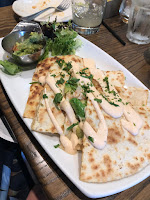 I had the tacos Gobernado ($15.50), which were three shrimp tacos sautéed with green chili and cheese and served with guacamole and a green salsa. Once you doctored them up with enough of the salsa and guacamole and some generous amounts of lime that I asked for, these were tasty. The really needed the lime though. The shrimp themselves were well cooked though and I liked the way the taco shells were sort of lightly fried to give them a little texture.

The kids both had giant burritos—one had chicken and one had beef  ($13.50). They were definitely large and neither finished. I think I would have gone with the grilled chicken or steak vs. the shredded versions they got. The meat was clearly slow cooked and had that kind of stew-like flavor, which if you like, you would like. If it’s not your thing, this is probably not the burrito for you. 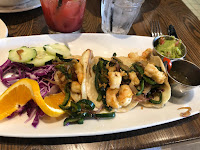 All in all, it was an interesting place with some nice variety on the menu. There are certainly more things I would be interested in trying, but nothing I had on this trip really wowed me. And my son doesn’t understand why we ever go anywhere but La Hacienda for a simple Mexican meal. I will agree, you certainly can’t beat their prices. This place is not cheap, but they do use a lot of fresh and unique ingredients. Will I rush back? Likely not, but I wouldn’t refuse to go either. 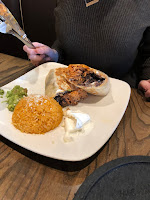