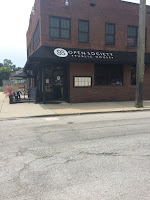 I guess some of those marketing emails work because Open Society has sent me a few of them (not sure how I got on the list though) and made me intrigued to try it for lunch. They call it brunch and serve it just about every day. They do have breakfast items and lunch items as well. 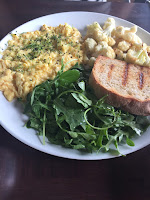 So my friend and I split the soft scramble ($10) and the Cubano ($10) and a side of fries ($3). The soft scramble was scrambled eggs with truffle Gouda and served with a side of cauliflower, dressed greens, and a big slab of toast. This was a tasty dish. The eggs were softly scrambled and still on the runny side, which if you ask me is how they should be—I don’t like them when they are super dry. And they had a light truffle taste from the cheese and some extra creaminess from it as well. The roasted cauliflower was somewhat unusual to see on a breakfast plate, but I liked it for a change of pace. And it was cooked nicely. I enjoy dressed greens with eggs as well.  The toast they use (which was also on the Cubano) is very tasty. Thick cut, but a nice crusty country bread. It was a somewhat unusual combo of items, but it worked. 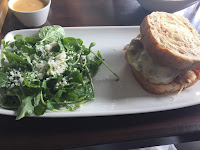 The Cubano is an interesting take as well. So, it’s not a thin pressed version like Cuban sandwiches, but I will forgive this fact (I do like a thin pressed Cuban sandwich) because the country bread used has an egg cooked into it. Yes, it’s an “egg in the hole” as part of the sandwich. This is a genius idea. So when you cut into it (I split it in half to share), the runny egg yolk breaks and makes the sandwich extra decadent. Inside the sandwich is smoked ham, carnitas, Swiss cheese, pickles and yellow mustard. I wished for a little more of the pickles and mustard to balance out the decadence of everything else though—especially with that thick bread. It was a tasty sandwich though, and I enjoyed it. The egg with the pork definitely gives it a breakfast-y feel. This was also served with a side of greens (mostly arugula)—I wished for a touch more dressing though. 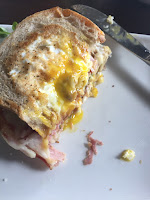 I thought the fries were fine-nothing really special here. Maybe if they were cooked a little crisper. I did ask for a side of the chipotle aioli to dip them in (it comes on the turkey club). Confession: I often search a menu for any type of flavored aioli/mayo and order a side of it if I am getting fries. So much more interesting than ketchup to me. It was also just fine, a little flat or something. I’d skip the fries next time. Both of the entrees we shared were very enjoyable though, and I like that they have some interesting things and variations of dishes on the menu. Lunch and brunch can sometimes get kind of boring, but this was good. And it makes me want to come back and try dinner again, since I really wasn’t wowed the first time. The menu looks like it has been changed up since that visit. 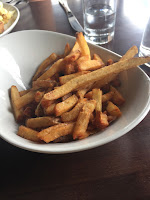 Good to see one of the newer places in town still open though—they had a decent crowd, although not super busy. The service was good and the food fairly quick. I am already planning a return lunch visit. 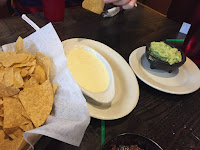 For years my family has gone to La Hacienda—since my kids were in  high chairs and threw half their food on the floor (we are very good tippers). It was fast, cheap and has great margaritas. It is always busy though, so we were excited when a second Luciana’s opened on 82nd Street near our house---it’s really big and much faster to get into during prime dinner hours. I believe it’s owned by someone who used to work at La Ha, and the menu is very similar, as are the ingredients. 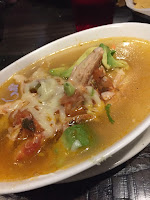 So, like I said, they are very similar, but there are certain things that are better at each place. After going several times, I have decided I like the Texas margaritas at La Hacienda better, but Luciana’s version is pretty good. The guacamole is far superior at Luciana’s to the green puree they have at La Ha. The chips are also slightly better at La Ha. Otherwise, food-wise, they are similar though. I have had the chicken soup ($7.99 full, $5.25 for small) both places and they are pretty similar—and one of my favorite items. It is a very homey mix with rice, shredded chicken, tortilla chips, avocado and pico di gallo. I do like that Luciana’s serves a small order because I never eat it all. We always get a side of queso dip and they are pretty similar to each other. Your standard white melted processed cheese.

My son likes the quesadillas—on one visit he had a chicken version, which came covered in queso ($8.25) and rice and beans.  Hubby tried the chicken chimichangas on one visit and wasn’t a huge fan, but liked the carne asada tacos on another visit a lot. These were part of a taco sampler ($10.25) that included the carne asada, chorizo and pork. The chorizo was actually really bland and the pork he thought was fine but nothing special. 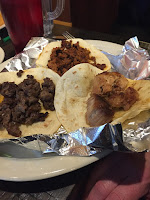 Basically, Luciana’s is a good option for this kind of Mexican food if you want to be pretty sure you don’t have to wait for a table. It is fairly equivalent to La Ha, with some things better at each place. For me though, the biggest draw is probably the margaritas, so I would probably lean toward La Ha. If guacamole was your main draw, try Luciana’s.

Anyhow, it’s an easy, fast place to grab a fast and family friendly dinner and it’s nice to see an additional locally owned place in the area. 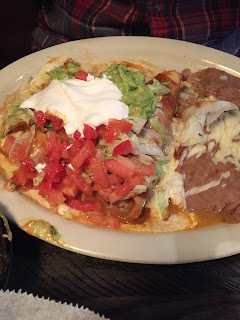 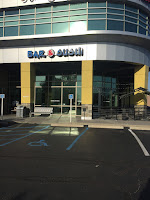 So you guys know I have been on a quest for a new most favorite (and close) sushi place. A friend of a friend said they liked Sakana of Tokyo in Castleton, and although I have driven by it many times, and seen it change hands a number of times, I had never been in. I figured, what the heck. So hubby and I gave it a go the other night when he had just come home from a business trip.

So the interior is sort of weird—very 80s nightclub kind of vibe, with lots of faux painting on the walls. The service was good (there weren’t many people there) and we got some wine to start. 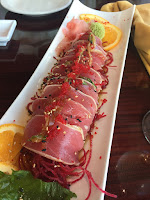 They also have one of those all you can eat deals, but we just went with ordering exactly what we wanted and not worrying about whether we ordered too much. We started with the tuna tataki with ponzu sauce ($13). I was feeling a little nervous about the freshness of things given their small amount of business, but this tuna was really good. It was just barely seared, and served with various garnishes—some roe and seaweed. It took us a couple of bites to realize the ponzu sauce was underneath the spiralized radish (I think) that was propping the fish up. Once we realized that and dipped it in the sauce, we liked it even better. 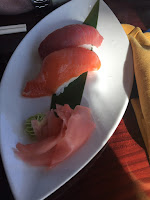 We had a couple of rolls as well as some nigiri. The nigiri (one salmon and one tuna to just get a flavor for it) was very good and we were very impressed with the fish quality. The fish in the rolls was good as well—I liked that the spicy tuna/salmon here is not just like a weird mush, but actual recognizable pieces of fish with sauce. We had a basic avocado and tuna roll with a drizzle of spicy mayo ($6), the fire dragon roll ($13.95) which was spicy tuna inside and topped with avocado, eel and unagi sauce and the ocean roll, which was shrimp tempura and avocado on the inside topped with tuna, tempura flakes, unagi sauce, masago and spicy mayo ($12.95). So inherently, there was nothing wrong with any of the ingredients in the rolls. These are all variations of things we often get. And I didn’t care that the rolls were kind of messy if you know what I mean—not rolled very tightly. The thing that was the big bummer for me was that the individual pieces were so huge that there was no way I could eat them in one bite. I actually had to cut a couple in half, which makes it no fun because you don’t get all the ingredients in every bite. 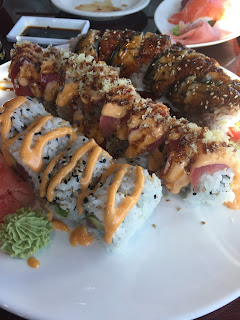 So overall, for me personally, I don’t think I would go back for rolls. I did really enjoy the appetizer and the nigiri, so maybe a meal of non-sushi rolls would be something I would do again. There are a lot of items on the appetizer menu that are appealing. But if you are a person who likes those all you can eat deals, you might want to look into this here. They must do a good lunch business or something, not quite sure how this big place stays afloat otherwise. 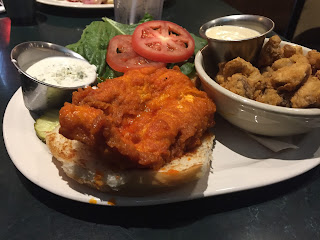 Sometimes you just need a high quality fried sandwich. And the other day I was meeting a friend and that’s what I wanted, so we headed to Sahm’s. My go to fried sandwich there is the buffalo chicken sandwich ($9.49)—they have a very tender chicken patty that is dipped in buffalo sauce and served with blue cheese (or ranch depending on your preference). They know how to do it just right. The knot bun is good, the chicken is good, and dipping it in blue cheese is perfect. I love their pickles as well, and always ask for extra. I also love the fried mushrooms on the side—they are the only place that I know of in Indy that does fried mushrooms and does them well. They give you this mild, creamy horseradish sauce to dip them in too. When I need some fried stuff, this is my go to. 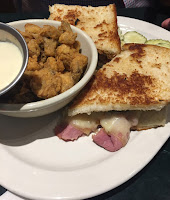 My friend had the Cuban sandwich, which I will have to say was quite delicious as well. I think it was a special that day—but it had very tender pork, lots of cheese and the requisite pickles and mustard. The bread was toasted nicely (I think they just turned a bun inside out but it still was tasty). And another order of mushrooms, because seriously, those things are great.

Sahm’s is a great place to go to get quality American pub-type food. The ingredients are good and many of the products (and beer etc.) are local. Plus, they do a lot to support the community, and I think that’s pretty cool.

So what’s your favorite Sahm’s item?