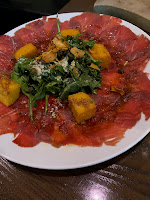 A trusted twitter friend mentioned a great meal he had recently at Nesso (thanks @tokenwhitedude) which made me intrigued to go back, especially now that the whole family is finally fully vaccinated (thank you science). The first meal or two I had here were great and then the food seemed to go toward that generic Midwest Italian giant portion thing for a bit. But I am happy to report that they are back doing great food and interesting pasta combos (with some “classics” to make everyone happy). They also have a nice variety of protein main dishes, although we didn’t try any on this visit. 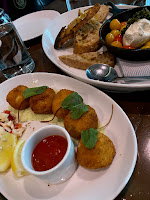 Man, the appetizers were great. I honestly think I would consider making a meal of them next time, or at least getting more of them and splitting a pasta or entrée with someone. We had the carpaccio ($15), the focaccia bread ($5), the burrata ($13), and the crab arancini ($15). That carpaccio is a perfect version of carpaccio. Extremely thin sliced raw beef topped with arugula, parsley oil, parmesan, lemon, fried capers and topped with these cornbread croutons. Wow—this is a dish that had the perfect amount of salt and acid. I think it was everyone’s favorite. 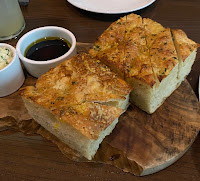 However, the burrata was so good too—mostly because of these amazing lightly roasted tomatoes that burst in your mouth when you ate one. I am totally doing this with my garden cherry tomatoes. Simple, but so good. There was also a topping of candied onion and salsa verde. A bite with everything was just great—the cheese was the perfect smooth rich foil for it all. And it was served with sliced, toasted and oiled bread. The focaccia was also superb (and when my daughter is with us, we order all the bread)—even though it would be hard to not order it every time. It was served with olive oil and balsamic to dip in, as well as herby butter, neither of which was really necessary because the bread was so good, but it was nice to have. It was also good with the burrata. 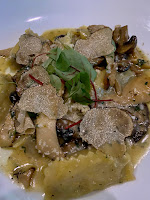 My daughter also has a love affair with arancini and we almost always have to order them if they are on the menu and these were very good—they were very moist inside (unlike a lot of arancini in this world) and had a nice cheesy interior studded with bits of crabmeat. They were served on top of a fennel aioli, which was delicious with them as well as a tomato sauce on the side (which I found unnecessary). I appreciated the lemon wedges as well for an extra acid hit, as well as the pickled and slight spicy vegetables on the side. 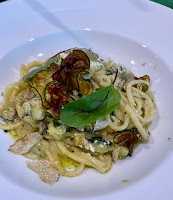 We all got different pasta dishes for dinner. We had the agnolotti ($18), the ravioli ($20), the lobster tortellini ($27) and the bucatini alla nerano ($20). I think the two vegetarian pastas (the agnolotti and the bucatini) were the favorites but they were all good. The agnolotti was little pillows stuffed with cheese and mushrooms in a very rich parmesan broth with truffles shaved on top. If you like mushrooms and truffles, you can’t really go wrong here. However, like I said, super rich. No way I could eat this whole dish of pasta by myself. The bucatini had a pesto type sauce but made with zucchini and walnuts. There were small chunks of zucchini in there as well. More truffles on top and lots of parmesan. It was really good too—and while it was rich and creamy, it was well-balanced. 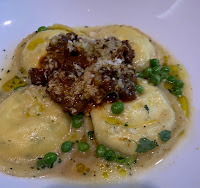 The ravioli were large and stuffed with ricotta cheese and were then topped with a lamb ragu—there were peas in there too. My son had played a lot of tennis that day and basically wolfed it down because he was so hungry. I think he liked it but I didn’t get a bite.

Hubby ordered the lobster tortellini which as stuffed with lobster mousse and had chunks of rock shrimp alongside. There was a light tomato sauce and some lemony breadcrumbs. The dish was good, but probably my least favorite—although I am not a huge tomato sauce with seafood person. 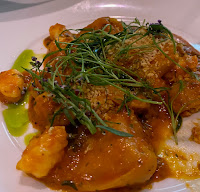 The kids had some amazing dark chocolate gelato for dessert and everyone was happy. This was one of the best meals I have had in Indy lately for sure—and I was so impressed with the finesse especially in the appetizers.

This is definitely a place to put back into the rotation, and I would argue one of the best Italian places in the city. Have you been lately? What do you think?