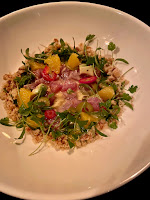 I know it’s been awhile, but I have to let you know when I have a great meal at a new place. Recently my husband and my son went with me to check out Bocca, which is in the old Shoefly spot. I like the remodel and it feels a lot more like a nice restaurant with a pretty bar, rather than a lunch place. The front door is strangely not really marked, but it is in the same place as Shoefly was if you ever went there. A nice sign on the door might make sense (and maybe a curtain or something to stop the draft from the door to some of the tables).

It was actually still Devour when we were there, and I did order it because there were some good options—I often don’t, but it seemed like a decent deal if you wanted to try a dessert. The Devour price was $45 for 3 courses. I chose the tuna appetizer which was marinated raw tuna with avocado, red onion, olives, and oranges—it had a tangy vinaigrette with some heat from a few peppers and a little truffle flavor. It was delightful and one of the most creative crudo/tartare versions I have seen in a long time. It was really good and I would easily order it again. The boys ordered the arancini ($12)—arancini are fried arborio rice balls and these are filled with gooey fontina cheese. They are served in a nice light and fresh marinara sauce and these were absolutely delightful as well. We were extremely happy at this point in the dinner and started to get nervous that maybe we had peaked. 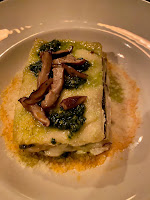 Well, my son and I also had very good pasta dishes. The one I got with my devour was the mushroom lasagna (normally $22 on the regular menu). It was a rich white sauce-based veggie lasagna with pesto, shitake mushrooms and spinach. It was very rich and decadent, but also quite delicious. I like the way the pesto gave a hit of something to cut through the bechamel. My son got the Bolognese ($21) which was fresh tagliatelle with meat sauce and a mushroom ragout on top. The pasta was perfect and the flavor was good. I liked that even the tomato sauces were fresh and acidic. He loved it and between the three of us, it was gone pretty fast. 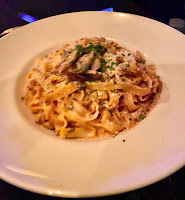 The only let down was the carbonara ($21), which is typically one of hub’s favorites. It is spaghetti (did not seem fresh) with guanciale, egg, black pepper and romano cheese. It is meant to be a pretty simple dish and the egg and cheese are what make it rich and decadent. This one just fell flat for some reason—the pasta itself wasn’t as good and the dish was just a little one dimensional. 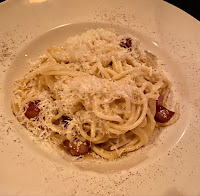 The dessert was not a star either—it was the bombolini which came with devour (usually $12), which are fried doughnuts with lemon curd. The doughnuts themselves were just a little dense and we didn’t finish them. I saw the tiramisu come out and it looked good—I would probably try this next time. And I have had friends tell me how much they liked the bombolini, so maybe it was just an off night for this particular item. 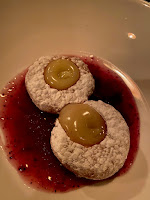 All in all though, we were really excited by the food, the menu and the place—the server was very nice as well and the wine list was interesting. We had a nice Italian Soave that we then ordered from the wine store because we enjoy it so much. I would recommend it and will happily plan a trip back, which is not something I saw often about Italian restaurants in Indy.