Some good friends have been inviting us to go to 9th Street Bistro in Noblesville—we have been there twice with them in the last couple of months and I have been meaning to write it up, but I am lazy and busy and well, I am sitting in the airport waiting on a flight delay, and here it is! Honestly, this is one of the better new (ish?) places in the Indy area and is a labor of love between a husband-and-wife team who came back to Indiana in 2020 to open this place (and we all know how that went….) 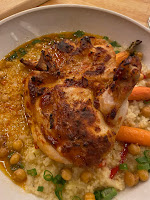 But this place is a little northern gem in the Indy area. Both times we have been here, they have highlighted seasonal items and have cooked them just right. I love that they change the menu fairly frequently, and seasonally, but also offer a daily?/weekly? specials menu with such things as the “fried thing of the day." The first time they were empanadas. The second time…soft shell crab. You wanna win my heart? That’s the way. Why it is hard to find, I don’t know. I mean, I get that there aren’t crabs in local waters…but you can get fresh seafood any which way these days. I don’t know why I don’t see them on all menus.

Anyway, both fried bits were delicious. And I (of course), loved the soft-shell crab. The crab was perfect. The sauce alongside (a tartar-ish aioli) was tasty. I could have lived without the bread underneath honestly—I felt like it just soaked up all the tasty sauce. The crabs were great though—and so were the empanadas—which now appear to be on the regular menu with a seasonally changing theme. 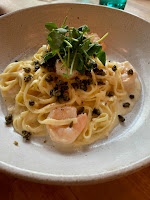 The first time we also had the bread plate with pimento cheese and the whipped butter because my daughter was home on spring break and if she could live on bread, she would. The focaccia was great—the whipped butter was also so tasty that we bought some to take home—the pimento cheese was good, but nothing mind blowing. Tasty, but not the best I have had. 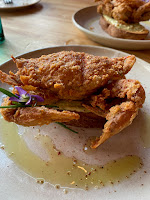 This last visit we also had the burrata starter and the asparagus starter. Both were very good and had lots of interesting flavor profiles—the burrata had a sweet edge, as it was served with apricots and orange honey and topped with crumbled pistachios. The asparagus had an Asian bent to it, and was topped with fried egg aioli, sweet soy and fish flakes—love the way the blow in the breeze. While I liked this dish—and the asparagus was just perfectly cooked—it was a little on the sweet side—I would have loved a little acid from somewhere.

The chicken at this place is amazingly good. I don’t typically order chicken, but I split it with my daughter the first time and had a bite of our friend’s version on this night. It was just a simple roasted chicken half (de boned) but man, it was so tender and had so much flavor, I would definitely order this again. It was served with a simple salad with locally grown veggies. 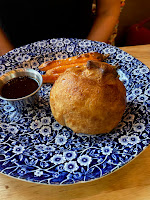 Hub and I split the pasta dish (there is always a pasta dish, but they change it up frequently). This one was house made spaghetti with a lemon cream sauce and sauteed shrimp and had fried capers on top. So good—so good. Would definitely get this again as well. One friend had beef wellington—which I didn’t try but looked delicious.

All in all, this is probably one of the best new (to me) restaurants I have tried in Indy in a while. Will definitely go on our rotation list. They also do a weekly special carry out dinner deal on Sundays (I believe) that look tasty, although I haven’t tried one. I signed up for the emails and always think they sound good. Now that I have tasted how good the food is, I would imagine these would be really good.