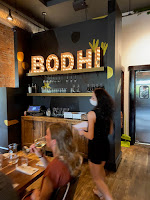 Recently hubby and I went out to dinner with some friends to celebrate their anniversary. It was a Monday and I was sort of  surprised how busy this place was! We had to wait about 40 minutes to get a table outside, which is good for them and gave us a chance to walk around and check out the Bottleworks buildings. The Garage Food Hall was doing a big business as well. We had a quick drink in the temporary hotel bar (which was empty unlike everywhere else) and then headed back to Bodhi when we got the text that our table was ready. 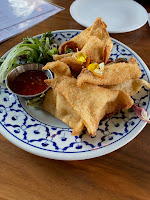 I have always loved the outdoors space here—when it was Black Market and now as Bodhi. They have mature wisteria growing through the roof and it is a nice spot. They are still doing good social distancing as well, which is appreciated. I also like the updates they made to soften the interior feel a little bit with plants and new lighting.

The friends we were with are like us and like to try lots of things, so we started with three apps. We had the spring rolls ($9), the crab puffs ($12), and the chicken wings ($15). They give you nice portions on all of the apps, and our favorite were probably the crab puffs—which were like crab Rangoon in a slightly different shape than usual. The spring rolls were mostly outside crunch without much inside. The wings were fine too—the little bits of crispy garlic on the side were tasty, but they weren’t overly spicy. None of the apps were amazing, all were fine, and I think we decided that next time we would save more space for more main dishes, which were clearly the stars. 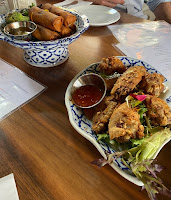 And we ordered several items to try. Probably my favorite of all of them (but they were all good) was the chili and basil stir fry (Pad Kra Prow) (we had it with the chicken) ($17). It had some heat at medium, but you could appreciate the taste of the basil in the dish. It also had onion and red bell pepper, and I really liked the addition of edamame, which was unusual and very tasty. This was delicious. 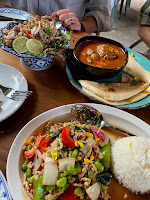 We also really enjoyed the shrimp pad Thai ($15). At first it seemed like there weren’t a lot of shrimp in there, but they were buried in the noodles. The rice noodles were plentiful and I love a good tamarind sauce combined with the chopped peanuts and crunchy bean sprouts. It is just the right combo of sweet and spicy and the shrimp were cooked perfectly, as were the noodles. I would definitely order this again as well. 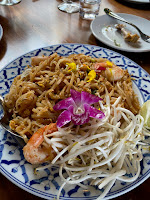 Our next favorite (and some at our table liked it best) was the laab salad (which we had with pork) ($16). It was a nice change of pace with its chili lime dressing to give a nice hit of acid. There was a lot of minced pork, onions, red bell peppers, lettuce, herbs and crispy rice bits. Honestly, it was hard to pick favorites because they were all so tasty.

The last dish we had was the massaman curry ($21 with beef). It was by far the heartiest, richest dish It came with Naan bread on the side, which we thought was slightly odd in a Thai restaurant—and honestly it was better with the extra side of rice  ($3) we ordered instead. The curry had big hunks of beef, carrots and fingerling potato. Very stew-like in my mind. It had a deep flavor though and also a nice touch of heat (we pretty much ordered everything medium).

All in all, this was a really tasty dinner—particularly the entrées. I love the interior of this place (as well as the outside seating) and I look forward to returning. They had a nice cocktail list and a decent wine list as well. Keep in mind, you have to be 21 and over to eat here, but what a nice addition to Mass Ave. They don’t take reservations, but it looks like you can add yourself to the waitlist on their website. We will definitely be back so let me know your favorite items.