My daughter and I were up north running errands and I wanted to take advantage of the opportunity to try something new. As I often do, I took to twitter and asked for suggestions. A couple of you suggested Jaggers, which I had never even heard about! That alone made me want to try it. Plus, it’s a burger/chicken sandwich joint, so I knew my daughter would be happy.

It’s not quite fast food—you order at the front and then they bring your food out when it’s ready. It wasn’t very crowded when we were in there, but I think it’s fairly new. The staff was all very friendly as well. According to their website, they don’t freeze their meat at all, and they bake their buns every day. 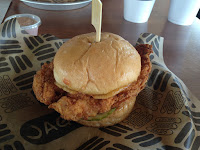 I had the crispy chicken sandwich ($3.99). I went with the standard basic to start with to get a sense of what they do with a chicken sandwich—they have spicy versions, and versions with additional toppings. They also do a grilled chicken sandwich.  The basic sandwich comes with pickles and Jaggers sauce. The sauce is a combo of BBQ sauce, mayo and sour cream. The sandwich was quite tasty—the chicken was nice and tender and the coating really crispy. I liked the way the breast meat didn’t get all tough and hard to eat the way thick chicken breast sandwiches can be. I liked the pickles for some acid. I think the Jaggers sauce is a matter of taste—it’s a distinctive taste, a little on the sweet side with the BBQ sauce but with a little tang from the sour cream. I found with a little more mayo on there, I liked it.  I can’t say I was in love with the sauce though. The chicken itself is really tasty and the freshly made buns are really good—very soft and light. 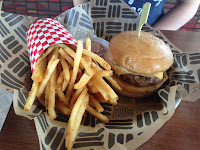 My daughter had a cheeseburger ($4.99 for a single plus fries and a drink for an additional $2.99). Honestly, I may have liked the cheeseburger slightly more than the chicken sandwich—same yummy bun and very juicy beef that they ground in house. For a fast food-ish place, they do a lot of things in house, which I appreciate. They call the fries shoestring—I think they aren’t that thin, but they were tasty. They are lightly battered and were nice and crisp, even if I have my doubts that they are making those in house. 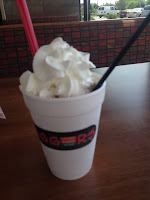 My daughter had a chocolate milkshake ($2.99)—it was fine, nothing that really made it stand out. The menu says they’re hand-dipped but it tasted pretty one-dimensional.

All in all, for a quick meal that’s not quite fast food, and extremely family friendly in Noblesville (and not a chain, or at least a very small one-looks like there are two), I think it’s a good option. I could see eating here fairly regularly with my kids for a quick lunch if it were in my neighborhood. Nothing mind-blowing, but all good quality. And I really enjoyed the buns. 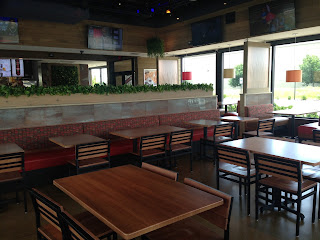