Ok, it was the buffalo fried chicken skins that lured me back to Cerulean.  I have never had a bad meal there, but the last one was a little lacking service-wise (and the food hadn't been as good as the first time). This time we decided to just go with one other couple and avoid any potential auto-gratuity issues. Also, my friend really wanted the buffalo fried chicken skins too.

The first thing we got was a really good table (something we did not as a party of 8) right in front of the main window. Lovely. We also had a very attentive server, stemmed wine glasses, and no hassle with our wine.

These are our drunken sailor friends, who will order willy-nilly a ton of food and share it all. The best kind of friends to dine with. We started with the Indiana cheese board ($21), the fried bread ($7), the buffalo chicken skins (natch)($6), and the compressed melon salad ($8). All of it was fairly spectacular I have to say, even though we probably over-ordered. The cheeses were great—there were four different cheeses ranging from a blue to a soft mild goat and it was served with wonderful salty housemade crackers, apple mostarda and preserved figs. It was a great combo with the fried bread which was good on its own, but also came with house preserves including a strawberry jam, a plum jam, a jalapeno cream and a mushroom custard—all served in cute little jars, even if they were a little challenging to get the stuff out of with the slightly too large spoons served with them. I think we all agreed we loved the mushroom one a lot spread on the fried bread, and I also really enjoyed putting a little of the jams on top of the cheese as well. Sometimes I used the crackers and sometimes I used the bread. All of it was delicious, but I think I would really want to order both again in the future to mix and match which certainly necessitates more than just hubby and me because it’s a lot of food.

The fried chicken skins were very tasty too. They didn’t have a strong buffalo flavor, more of just a more heavily seasoned fried chicken, but they were extremely rich and decadent. The Gorgonzola mayo underneath could have used a bit more blue cheese flavor, but I enjoyed having something rich to dip into. A very cool take on some classic flavors. The melon was also a refreshing variation from what were some very rich appetizers—and it was a smaller size for sure. The only thing I didn’t like at this stage of the meal was the amuse bouche they served—it was a slice of pickled apple that was so tart, it almost choked a person. Small bits of these would have probably been lovely with the cheese, but on its own (well, with a bit of caramel corn) was a bit much. 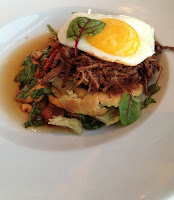 As far as the size of the plates, I guess Cerulean had decided to move away from the very small plates into a more standard kind of menu. The first page of the menu is larger, more shareable items now. The second page is more of a classic appetizer and the third page classic entrées.

The three second courses we had were the Mangalitsa pork ($16), the summer squash ($12) and the lamb sweetbreads ($14). Again, everything was very good. The pork dish was very large—it had an herby biscuit underneath, lots of shredded pork, some mushrooms and tomatoes and a light, slightly maple vinaigrette underneath—and of course, the thing that sold me, a beautiful sunny side up egg on top. This was clearly big enough to be a main dish.  The meat had a lot of flavor and I liked the yolk making the thin sauce a little thicker and richer.

I only had a bite of the squash but it was very tender and was well seasoned—there was tarragon as well as some fruit preserves underneath.  Probably my favorite second course was the lamb sweetbreads. They were little pieces that were fried very crisp (they know how to fry things up here). There was a creamy yogurt sauce and a very thin agrodolce (sweet and sour) sauce flavored slightly with rosemary. A great combination of sweet, tangy and completely over the top decadent with the fried bits of sweetbread. I could easily eat a whole plate of these I think.

For my main dish I ordered the vegetarian option which was heirloom tomato confit ($24) and hubby ordered the ribeye ($34)—we planned on sharing. Again both were very good, although I don’t think the tomatoes would have been enough on their own for an entrée, it tasted more like a heavy appetizer. I liked the way they had cooked the tomatoes whole though, and that it was a hot dish. There was also some formage blanc (sort of like cream cheese) underneath and a lemony vinaigrette on the whole thing. I could have used a little more of the cheese to go with all the tomatoes.  I liked the fresh arugula for a nice texture variation. It was good but I would have been disappointed if I weren’t sharing with hubby. His ribeye was delicious—it was a thin cut style and had a wonderful homemade vinegar steak sauce and large mushrooms and soft on the inside, crunchy on the outside, cheddar bacon croquettes. Even though the steak was very thin, it was cooked appropriately. I also had a bit of my friend’s salmon –it had great bright flavors with pineapple on top (there were some hot slices of chili pepper as well which I skipped.

I have been impressed with pastry chef Pete Schmutte since I first had his desserts way back at the City Market dinner I organized awhile back.  He does a lovely job of presenting them and coming up with flavors you don’t see on every menu in town. Our friends ordered the stewed cherries with angel food cake, buttermilk Amaretto cream, sarsaparilla ice cream and black pepper ($9). I had a little bite, and it was tasty. I also loved my simpler trio of sorbets ($8)(exactly what I wanted after all that food). And when they told me passion fruit was one of the flavors, I was sold. There was also pineapple mango and a strawberry. All were light, bright, and delicious. The little macaroon on the side was a nice thing to eat along with, although I would have loved a couple more. 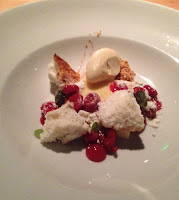 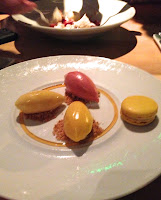 This was our best meal at Cerulean yet, and top to bottom, one of the best I have had in Indy for a while. I continue to hear mixed thoughts about the restaurant, but this meal made me appreciate how lucky we are to have such a modern, artistic space with wonderful food. It’s a nice counter-balance to a lot of the more casual, bar-centered restaurants that have become so prevalent in Indy.