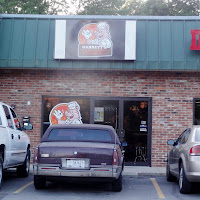 I noticed this place while driving by it a few times—it isn’t too far from my house and of course, always on the quest for good barbecue, I was intrigued.  I asked around and no one had been there, so of course that just made me more intrigued.  So the other night we had some friends over and ordered carry out (no booze in the place). 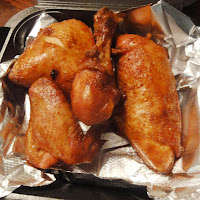 The best things were the bone-in smoked meats.  I really thought the flavor of the dark meat pieces of chicken was outstanding—the meat was pink with smoke and had a great smoky flavor.  The breast suffered a bit from being dried out though.  The spare ribs were good too—very smoky and tender—not fall off the bone and not so tough to get off that you had to gnaw on them.  The right amount of give.  The turkey was interesting—I have never had turkey ribs before.  They were good too—similar in their tenderness to the spare ribs and seemed to have been marinated in seasoning even more. Nice smoke flavor. 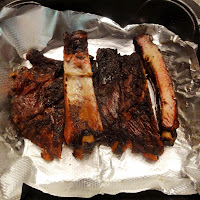 We got all our sauces on the side—they do sweet, mild and hot.  I started with the mild and stuck with it—it actually had a decent amount of heat to it which I appreciated. Usually I am torn about what sauce to get because the mild is too mild.  But maybe because they have the sweet, they do the mild with a little more spice.  It had a little vinegar taste to it too which I liked. Dipping that chicken thigh in the sauce was the best part of the meal. 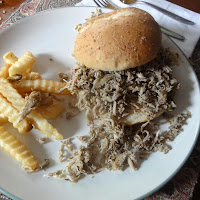 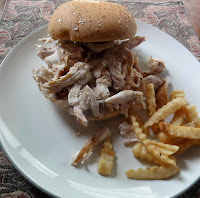 Sadly, the meat that wasn’t on the bone (the pulled pork and the pulled chicken) were the weakest links I thought.  The pork was very dry and kind of stringy.  Sure, drown it in sauce, and it was ok, but I wouldn’t go this route here.  I like bigger chunks of pork in my pulled pork.  The chicken seemed to be the half chicken a day or two later and pulled off the bone.  Pretty dry.  The best of the sides I had was the potato salad—the adults universally seemed to like it.  It was old style with plenty of mustard and maybe some sweet pickles?  The mac and cheese wasn’t bad either—clearly homemade but not overly creamy—more dry than many, but I still enjoyed it. 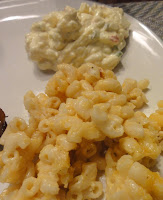 Hubby picked up the food and said it was doing a decent pick up business when he went and that he really liked the people working there (apparently the lady packing the orders told him straight away that he was early and would have to wait—he enjoyed her attitude I think).

You know, it wasn’t blow your mind, but it was the best of what I have had around our house so far (not the best in Indy I have had, but the best within a 5 mile radius of my house).  I liked the sauce, and I liked some of the meat.  Worth another go anyhow.