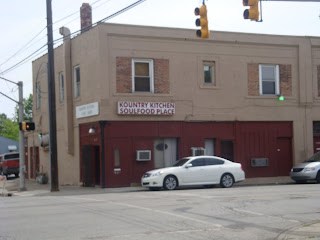 This fried chicken thing is bordering on obsession now…people keep recommending new places and I keep feeling obligated to try them all. And well, Kountry Kitchen has been on the list awhile anyway, so why not kill two birds with one stone?

The first thing about Kountry Kitchen (and I have seen it spelled many different ways, but I am going with this because this is what they have on their website, but can someone please tell me why businesses like to spell things wrong?) is it looks a bit run down from the outside. Like, if it weren’t for the sign, you would never guess there’s a restaurant in there. And while it is better on the inside somewhat, this is not a fancy place by any stretch (although it was good enough for a visit by President [then candidate] Obama during the campaign). The fact that there are no windows and lots of flickering and burnt out fluorescent bulbs didn’t really improve the ambiance.

But we sat down in the brightest room (the one furthest in the back) and were greeted by a friendly server. And there was a decent lunch crowd in there for sure. We perused the menu and decided to get a fried chicken dinner (natch) and one combo dinner with fried catfish and chicken wings. We got mashed potatoes, macaroni and cheese, and white beans as sides. The lunch plates are also served with either baked or fried cornbread. We got the fried.

The cornbread was more along the lines of pancakes made with some cornmeal. They had a little of the sweet cornmeal flavor, but not a lot. And again, I was missing some butter or something to put on them. They just seemed a little dry. As for the fried chicken, we had a thigh/leg quarter, and while it 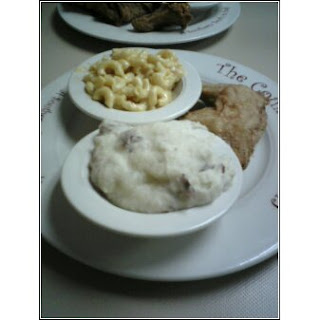 was tender, I didn’t find anything particularly special about it. The skin was crispy, but basically unseasoned. The wings were a little more flavorful; they appeared to be seasoned a bit, but still nothing noteworthy. I don’t know, maybe you are supposed to doctor it up with hot sauce of something, but I think really good fried chicken should be able to stand alone.
The catfish was certainly more flavorful and had a seasoned breading on it that gave it more flavor. And it was so hot

when it came out, we couldn’t eat it for quite awhile. I thought it was pretty good as is, and once hubby started dipping it in hot sauce, he really enjoyed it quite a bit more and promptly polished it off.

The mashed potatoes were the chunky kinds with a bit of the skin in there, which can be really good, but I have to say, I didn’t really think these were. They were a little pasty and didn’t really have a lot of flavor. I just had a bit of the gravy and while it is obviously homemade, it seemed really salty. Hubby, who generally eats gravy on his potatoes, stopped eating it after a few bites (it was on the side). The mac and cheese wasn’t bad, but it was your typical orange kind and based on the consistency of the cheese sauce, I would say was made with a Velveeta-like cheese. I hesitate to compare one place to another too much, but when I think of the mac and cheese at Mississippi Belle, with its peppery flavor, there really is no comparison. I didn’t end up eating the white beans, but hubby said they were fine, nothing special and again, lacking much seasoning.

I don’t know, maybe the fried chicken isn’t the thing to order here, but I was quite disappointed with my meal. Especially after just going to Mississippi Belle a few weeks earlier and having a much better meal at about 2/3 of the cost (and apparently at dinner time they are all you can eat). On a side note, it may be time for me to give the whole fried chicken quest a bit of a rest, as my waistline is suffering a bit (as is my digestive system). Although, with that being said, of course if you know of more places I am missing, keep ‘em coming! I am sure it won’t be long before I just have to give a few more contenders a try…