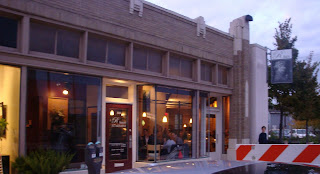 Hubby and I got an unexpected babysitter the other night and were at a loss for somewhere good. We decided on what is probably one of the best places left around here these days—R Bistro. We always check the menu first though-it changes weekly and sometimes it sounds so good, and other times not as much.

Anyhow, this menu looked pretty good. Since I have reviewed this place quite a few times, I won’t go into the ambiance and service too much, but suffice it to say I like that this restaurant is very professionally run and the fact that you feel like people know what they are doing. It has a sort of quiet confidence that I really appreciate. I also like that there are also always other people there no matter what time you go.

I started with the Asian pear, endive, tamari pecans and blue cheese salad. It was lovely in its presentation. (By the way, sorry my only pictures are sort of dark, I was trying to not be too obvious). The flavor combination of the pears and blue cheese was great—I love fruit with blue cheese and the pears were perfectly ripe. The peppery-ness of the greens was great and the sweet and slightly spicy flavor of the pecans was a nice counter balance. Hubby really enjoyed it too

For my main course I had one of the starters on the menu, the New Orleans shrimp remoulade with fried green tomatoes (hubby also had this for his appetizer). These were really good. When I eat shrimp so perfectly prepared, I think 2 things: 1) why doesn’t R Bistro have more shellfish 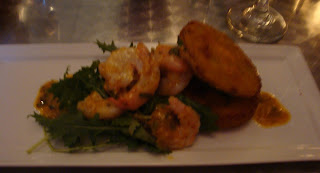 on their menu; and 2) why can’t more restaurants do such a good job with shrimp? They were perfectly tender, in a tasty remoulade sauce alongside a couple of good size fried green tomatoes. The tomatoes were the right amount of tartness to balance out the shrimp and I really enjoyed this dish.

Hubby had the grilled elk steak with tomato watercress relish and warm potato and preserved shallot salad. He was really torn between this and the duck that night and decided to go with the elk because he had had a lot of duck recently. Our server told us that it would be prepared to medium rare because any more well done would have made the meat tough. Now this was fine, because this is how we like meat, and this is how it was prepared, but unfortunately, the meat was still a bit too tough for my taste. Not sure why—other very lean red meats like bison don’t seem to have the same problem, but I wouldn’t have enjoyed this as my main dish because of this problem. The sides were pretty good, I liked the watercress and tomato combo, although I found the potatoes a little bland. I was glad I had my shrimp on this one. 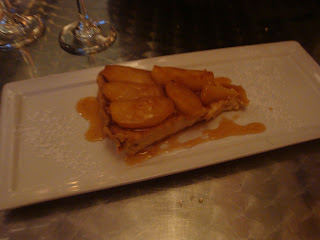 We also had the apple tart which was pretty good too—I don’t often order dessert at R Bistro but since I had two appetizers we decided to share one this time. Like I said, it wasn’t bad, but nothing out of this world or anything. I have always found desserts to be R Bistro’s weakest link, which is one of the reasons I rarely order one.

But if you want to go to a restaurant that is consistently producing good quality, and creative, ever-changing dishes, R Bistro is one of your only bets in this City, and one of the best.