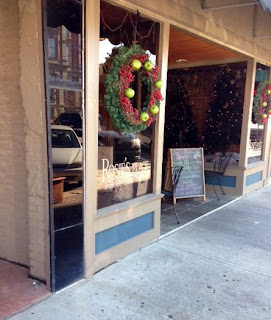 I had to be way north the other day, so naturally my mind wandered to where I could grab lunch that was new.  I thought of Rosie’s because several people have recommended it and I have read about it a couple places.  I didn’t realize it was right on the square in Noblesville—right in between the Asian Grill and Matteo’s. It’s a pretty big place, and I loved all the sweets piled up as you walked in.  The lady who greeted me (and was my server as well) was super nice and very friendly.

The menu is half breakfast items and half lunch—the lunch side is made up mainly of salads and sandwiches.  I was torn about which way to go—honestly, everything sounded good and I am really looking forward to trying breakfast as well. Those breakfast tacos have my name on them.

So in order to try as many things as possible since I was by myself, I got a “pick two” ($7.50) and had a half sandwich and a soup—ok, and I also got a side of mac and cheese ($2.50).  The sandwich I got was the roast turkey club.  The sandwich was sliced turkey, bacon, slices of cheddar cheese, lettuce, tomato and basil mayo.  A sandwich like this can go one of two ways—it can be fine, but kind of boring, or there can be something special that sets it apart.  This one was pretty special.  The main thing that made it for me was the basil mayo—it was really good—and was on the sandwich in an ample amount to actually taste it with just about every bite.  It added the tangy flavor that sets a sandwich like this apart (the thing that Taste does in spades). The bread was also really good too—it was fairly thick sliced wheat bread, but which was perfectly toasted and soft enough that it didn’t turn the sandwich too bready.  All the main ingredients were great too, but without that little extra that came from the mayo and the great bread, it would have just been a sandwich. 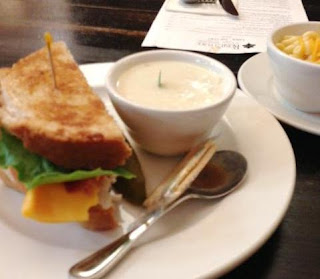 I had a cup of one of the soup specials—the chicken velvet, which is a popular Hoosier specialty. I mean I assume it is served in other places, but you certainly see it in Indiana a lot. I know it was a famous item from the LS Ayres tea room, but I wonder where it was actually invented. Anyway, I have had it several places before, and this one was good—I mean this is a soup based on cream and butter that is thickened and has hunks of chicken added—it is super rich, and this was no exception, but it was well done and I was amazed with how tender the pieces of chicken were that were in there.  So often with soup, because the chicken has been heated so long, it tends to get tough and stringy, but this chicken was not.

The mac and cheese is homemade, and it wasn’t bad, although it didn’t blow me away.  It is a creamy sauce, although it isn’t a really saucy mac and cheese.  There was also melted shredded cheese on top. I would probably add a little more seasoning to it (I added salt and pepper and then liked it a lot more) because it was a little bland on its own.

All in all, this is hearty stick to your ribs kind of food done with just the right amount of flair—when the weather is warm again, I look forward to trying one of their many salads—they sound really good as well.  The ingredients being used are high quality and they are appealing to down home sensibilities, but at the same time offering some slight twists on classics.  The day I was there they were offering a fried pork tenderloin sandwich as well—it looked pretty intriguing. My server was really friendly, and I left the place feeling full and like I had been well taken care of.  I certainly would like to go back and try some other things.  I also would love to hear other recommendations for Rosie’s or Noblesville in general if you have them.