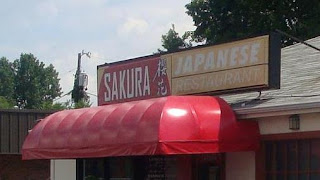 Sakura is the old guard sushi place in Indy—I think it opened when I was in high school (Lord, I’m old) and was the only one of its kind for awhile. Nowadays, sushi is everywhere, and in varying quality.  I am pretty sure the décor has not changed one iota since it opened, right down to the fake flowers hanging on the walls.  Honestly, I am surprised I haven’t written about it before—we have been lots of times, although the last time we went I swore I would never come back because the service was so horrible (and of course we were with the kids).  It can get crazy crowded, and when it does I find often it seems the staff sort of hovers in the back corner and the sushi making becomes progressively slower.

I started with a bowl of miso.  As I have said before, I have never really found a lot of variation in miso soup other than sometimes they have a little  more tofu (yay, this one did!), or a little more seaweed.  Other than that, what I can say about it was that it was scorching hot. Burned my tongue hot, which is not a great precursor to sushi, but oh well.
Anyway, I was in the mood for sushi, it is probably one of two of the closest sushi places to my house, and it was still early enough that we knew it wouldn’t be too crowded yet.  Also, as a bonus, sushi is 20% off at Fridays for lunch.  We ordered three different rolls to share—the crunch (around $6-7, it was a special), the rock ‘n’ roll ($8.40), and the Gabe roll ($6.30).  The crunch roll was good—pretty straightforward—it was shrimp, krab, and avocado on the inside with little tempura bits on top.  Even though I don’t usually order things with krab, I went with it because it sounded like a good basic roll, and I like the little crunchy bits.  They served it on top of a little spicy mayo which was nice to give it a touch of heat—otherwise the roll didn’t have a ton of flavor on its own.

Hubby’s favorite was definitely the Gabe roll. Basically, this is Sakura’s version of a spicy tuna roll—however; the quality of it is much higher than most sushi places.  They actually call it tuna tartare, and it is nice chopped pieces of Ahi—it is mixed with green onions, flying fish roe, and “spicy sauce.”  They fill the inside of the roll with it and then mound it on top as well.  It is mounded so high, it is nearly impossible to gracefully fit it into your mouth.  I ended up sort of eating the top of the stuff on its own and then the roll.  It was good, but there was nothing really to break up all the tuna salad type texture. It wasn’t exactly what I was expecting. 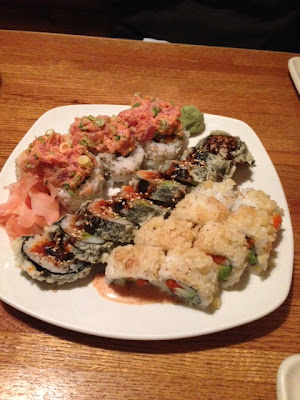 The last roll (rock ‘n’ roll) had a lot more going on, but it was probably the least favorite of both of us.  So it had the seaweed on the outside, then rice, then avocado, smelt roe, eel and crab.  The whole thing was deep fried for 20 seconds so it was slightly warm and had a very light tempura batter.  It seemed like it had all the things I liked, but there was something that was just a little too strong about it—maybe too much eel sauce, maybe the very generous amount of smelt roe—it just came across as overly heavy—it was hard to really taste the various ingredients.

In past visits, I have also had udon which was pretty good (love the poached egg in there)—and a nice idea on a cold day (although if it’s Friday, you can’t really pass up 20% off).  I posted my picture from that visit, just for fun. I appreciate that they served the tempura on the side so it didn’t get soggy.

I know Sakura is the original sushi in Indy, but I can’t say it is the best in my opinion—although I am sure there are those that would disagree.  But it is nice that we have so much variety these days.