So I kept on seeing all the hype on the interwebs about King Dough, and to be honest, I had my doubts about how good it could really be. But naturally, my interest was piqued and so we headed over there to give it a try. It’s on the east side of downtown, in what looks like an area that is revitalizing currently. A lot of new housing etc. It also has a nice outdoor area that people were standing in on one of our rare sunny days lately, but which will be very nice once we have actual reliable warm weather. 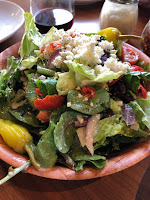 They were quite busy at around 6:30 on a Saturday, but even though they initially told us it would be a 15-20-minute wait, we actually got seated immediately. Unfortunately, I think this was maybe not the best for our server who was a bit in the weeds, and our service suffered all night because of it.

Anyway, we started with the Greco salad ($9 for small, $15 for large), which was chopped lettuce, spinach,  and mixed greens with olives, cherry tomatoes, red onions, peppadew, and pepperoncini. It also had crumbled feta cheese and a great zesty Italian dressing (lemon basil vinaigrette). (It comes with green bell peppers too, but we got it without.) This was a fabulous salad and exactly what you want in an old-school Italian salad. Lots of little bits of flavor with a super tangy dressing. The picture you see is the small, which I think easily serves 2-3. I ate slow because I wanted to save some to eat alongside the pizza. 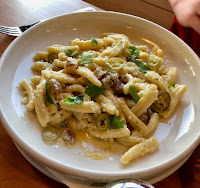 My son ordered the casarecce carbonara ($15), which came out next (they apparently just bring things out as they are done, so plan accordingly). It was the pasta topped with a light, but creamy carbonara sauce—which is mainly egg and some parmesan cheese with hunks of bacon and some sliced pickles habanero peppers on top. They  use cured egg yolks as well. The peppers were unnecessary and a bit hot (if they were more pickly and less hot I would have been into them), but the pasta dish was excellent (we picked off most of the peppers). Seriously, this is one of the better pasta dishes I’ve had in Indy in any restaurant, Italian or not. The pasta is cooked just right, and the sauce isn’t so overwhelming that you want to stop eating it after a few bites. We all happily ate off of his dish. I would love to try all the pasta dishes---and I saw the polenta with meat sauce on another table as well and it looked amazing. Sadly, they were out of the first choice my son wanted (pappardelle Bolognese) but he was very happy with his second choice. 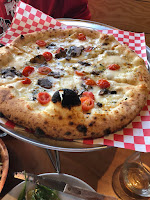 Hubby and I debated which pizza to get for a long time—he really wanted a meat-full pizza and I really wanted the “stinky pete.” I won this battle and we got the stinky pete ($16.50). So this is a pizza with mozzarella, goat and gorgonzola cheese—there is no red sauce on it. It is topped with mushrooms and roasted cherry tomatoes. It was really, really good. Even my son who claims to not like pizza most of the time (he was ruined for pizza in Indy when we were in Italy) really enjoyed it and said he would happily eat it again.  It had a nice kick from the goat cheese and blue cheese and the crust is thin and bubbly on the edges and is just the right chewiness that makes you want to eat every bite of it. Loved it combined with the acidic salad. There are lots of good combos on the menu though—and honestly, I bet the simple margarita is delicious too. Hubby has plans for bringing more people next time and also getting one of the meaty ones (even though he really wants the stinky pete again too). I would also like to come with a larger group and try more of the appetizers as well. 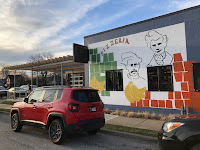 So, I will say, it is a place that lived up to the hype and will definitely go into the rotation for us. They don’t take reservations though, so prepare for a possible wait. The food turnover is fast though, even when the service is really slow, as it was for us (you will get food, you may just not be able to get a drink).  I recommend having enough people to order a bottle of wine so don’t have to wait if you want another drink. All in all, it is one of the best new places we have tried in a while.

Oh, and let me know your favorite pizzas here!