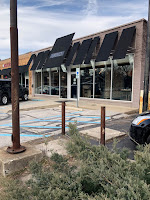 I was excited to try Neal Brown’s new restaurant venture, Ukiyo. I have been a couple of times, but am mainly focusing this post on the most recent visit, as the first one was very soon after they opened and I like to wait a bit longer than that before I write about a place. We were with another couple, which was nice so we could order more items.

First of all, I really like what they have done with the space. They took the old Recess which was always sort of industrial in its feel and warmed it up with some texture and color variations. The sushi bar area is light and bright and the main part of the restaurant is dark and more dramatic. I was happy to sit in the sushi bar area this time because it was still light, and it made my pictures prettier. It’s pretty dark in the main room. But it gives it a nice ambiance, 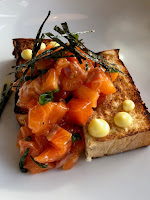 We started with the salmon tartare ($12), the octopus “dumplings” ($10) and the fried chicken kaaragge ($12). That fried chicken is great. I have had it both times and once for lunch (review to come) and it’s always been delicious. It is pieces of fried thigh meat, which is very crisply fried and it is lightly tossed in a honey sauce and sprinkled with matcha powder. It is an interesting combination of flavors. I always think I won’t love that much sweetness in a savory course, but this is balanced nicely and the chicken is just so well done. Definitely a must order. As far as the others, the salmon tartare is beautiful and bright, but is not seasoned a lot. The melt in your mouth fish was just crying out for some acid. But then again, you know me, that’s how I am. I just would have liked to see a little more to it that what it was. The toasted bread underneath was very good—light and soft but toasty too. As for the the octopus dumplings, I think they are misnamed. When I am in an Asian restaurant and I read the word “dumplings” on a menu, I am expected soft wonton-wrapped bundles filled with something. These are actually more like fried balls of dough that are dotted with bits of octopus inside. They are more like a bread ball and less like a dumpling. It’s a matter of preference I guess, but they weren’t my favorite thing, but maybe if I had expected something different, I would have enjoyed them more. I did enjoy the bonito flakes waving in the air on top. I think that’s always a very cool effect. 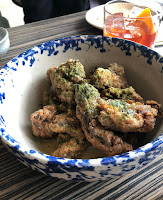 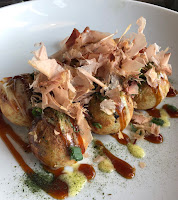 From there we went on to order sushi. We got the ”Hachiman,” ($15) which is farm raised blue fin tuna roll, which was avocado on the inside and chunks of the tuna on top. We also had the “Izanami” ($12), which was spicy shrimp kaarage and Japanese mayo. Finally, we had the “Uke mocha” ($19), which was crab and avocado inside and salmon on top. I think the sushi is certainly the star here based on what I have had. Both times the rolls were my favorite part for sure. Even the “designer rolls” are pretty simple though, and the fish is certainly the focus. They aren’t hiding the quality with showy things like lighting it on fire, and they aren’t dousing it with sauce. I’m not saying I don’t like a good gooey roll when I am in the right mood, but these were nice in their simpliciy. I am trying to think which was my favorite of the rolls we have had and I might say the shrimp kaarage because I liked the texture variation. But they were all good. Again, they are on the simple side (there was certainly a part of me that was thinking a little thin slice of lemon or a touch of jalapeno would have jazzed it up a little), but hey, I’m not the chef. Fish-wise, it is some of the best and freshest in town. 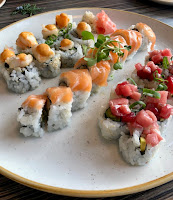 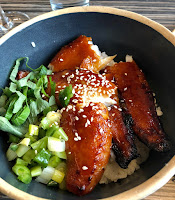 As we ordered the sushi, we also decided to add one more hot dish to our order. We ordered the barbecued catfish on our server’s recommendation. Honestly, as it turned out, I was so glad we ordered this one—it may have been my favorite all around item of the evening. It was catfish sort of done in the style of barbecued eel (which they don’t serve because it is endangered, which I respect). This dish was great. Nice sticky rice, lots of scallions and several nice pieces of very tender catfish in a slightly sweet, slightly spicy sauce. I would happily eat this whole bowl myself. There’s always a next time right?

Overall, I feel like Ukiyo is still finding its exact groove, but it is off to a nice start, and it’s a place we need in Indy. I hope they keep tweaking things and I am hoping maybe one day there will also be some full-on dumplings on the menu because they’re one of my favorite things and now that they’ve said the word I really want them. But in the meantime, get the sushi and the catfish and the fried chicken. You’ll be happy. I will say I was a little surprised they weren’t busier on a Friday night, but it’s certainly a place worth checking out. And they take reservations! So that’s always a plus.