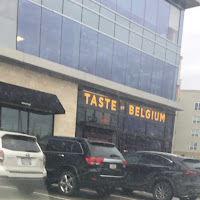 Hubby and I were in Cincinnati for a quick trip for one of his oldest friend’s milestone birthdays. We ate food that was provided at the party for dinner, but I was excited that there was a Taste of Belgium right down from our hotel and that they opened early so we could grab breakfast on our way out of town the next day.

The reason I was so excited was buckwheat crepes!! There was a French place in Oakland years ago that I used to eat lunch at with my legal colleagues that had the absolute best crepes.  I have forever been on a quest for one as good. 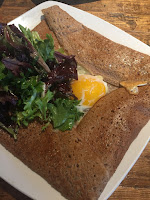 I ordered the “the OG” ($11), which is a buckwheat crepe with a runny egg, Gruyere, ham and mixed greens. In theory, this is exactly what I like. In execution, it was fine, but not amazing. It came across a little dry, even with that runny egg. The crepe was a little thicker than I prefer. And I think I prefer my mixed greens more on the side to eat alongside it, as I want to. Also, the egg wasn’t really seasoned, and it took forever to get salt and pepper, which was not on the table. I believe an egg should be seasoned (at least salt!) and if the kitchen isn’t going to do it, then it should be left to the patron to decide with shakers on the table. So it was a little disappointing. 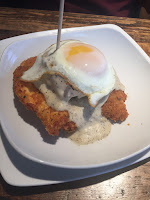 Hubby had the chicken, biscuit and gravy ($12), which was better than mine I thought. It was a biscuit with a fried boneless chicken breast, pepper gravy and a sunny egg on top. There was a lot going on there for sure, but I really liked the super light and crispy panko-type breading on the chicken. And they kept it tender, even though it was white meat. Again, I am a believer that an egg should always be seasoned and this one wasn’t. It wasn’t as noticeable because the chicken and gravy had seasoning in them, but still. Am I the only one who thinks this? Anyway, he also ordered a side of goetta, because well, we were in Cincinnati. Seemed like the thing to do. If you haven’t had it before, it’s a combo of oats and sausage (sort of like poor man’s sausage), with lots of seasoning and is pan-fried crisp. It was tasty, although I think I like it as part of something else (see goetta eggs benedict at Nada) best.

All in all, I was a little let down with this meal but maybe my expectations were just too high. Lots of good looking items on their menu though, and I can’t say I wouldn’t try it again. 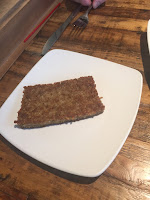