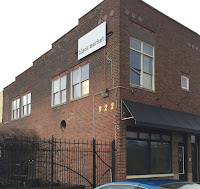 Hubby and I had a rough day the other week and decided we needed a good lunch. With wine. So we decided to go to Black Market because we hadn’t been there in awhile and the last meal we had there was pretty tasty. 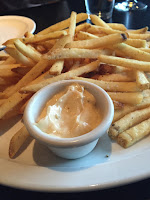 Even at the fairly late hour, there were some other late lunchers like us. Our server was really friendly and helpful even though she was running the front of the house by herself I think (probably not expecting so many people there that late). Right away we ordered our wine and some French fries. The French fries at Black Market are delicious and they serve them with some sort of flavored mayo each time. I love flavored mayo with my fries, especially with fries as yummy as these. They definitely hit the spot.

I was intrigued by one of the specials on the board—the Miller Farm chicken and mushroom etouffee with baby kale, a fried egg, and toast ($10). And I was right to be intrigued. It was delicious. It had a definite rich decadence to it, even though because it was mushroom based, it had a unique, slightly lighter taste to it. I loved the really tender pieces of chicken and the nice and runny eggs. Put a bit of that with some of that gravy on toast, and you’re all set. It was pretty big though luckily because we ended up fighting over it because we both liked it so much. I would have killed for one more piece of toast though. 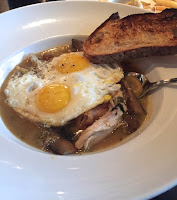 Hubby ordered the other special and it just wasn’t our cup of tea. They were the Ale steamed mussels with Smoking Goose bacon, roasted tomato and a mozzarella stick ($10). Let’s be totally honest, hubby really wanted the mozzarella stick that came with it (he had toyed with getting them as an app) and this sold him. He did love the mozzarella stick—they are larger than your average fried cheese stick and hand breaded. Neither of us really cared for the flavor of the mussels though. That hunk of bacon was tasty though. 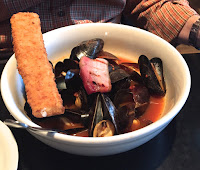 We thought we were done, but then we heard someone else order the brickle and we knew that we deserved one too. We both love this dish of caramelized saltines with caramel and chocolate sauce and a dollop of cream cheese ice cream ($7). This might be one of the most perfect desserts ever because of the saltiness of the saltines. And after a stressful day, it helped! 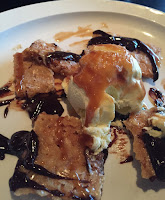 Black Market is a solid place. I don’t usually like everything I have on any given meal, but I usually like most of it, and I appreciate that they change up the menu a fair amount. It also just has an calm, adult feel to it. Perfect for that particular day. 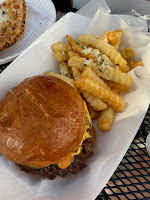