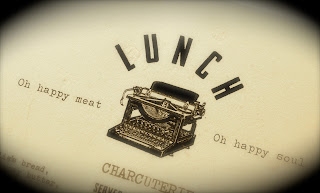 Hubby and I scheduled a nice lunch out the other day and decided to try Bluebeard.  We have been several times for dinner, and I was interested to see how the lunch menu differed.  The last meal we had there was outstanding, so we were hoping for more of that.

Bluebeard’s lunch menu features many of the items from dinner—the charcuterie, cheese and many of the “snacks.”  But they offer several sandwich options as well.  We decided to mix it up and share several things.  We started with a small portion (they call it a side) of the duck confit Caesar salad ($8).  First thing, for a small salad, this is an extremely generous portion. I can only imagine what the full portion is like.  The salad was really good. Hubby could not stop talking about how much he liked it.  There wasn’t too much in common with a traditional Caesar salad when you looked at it other than some lettuce and croutons—it was full of lots of other things—red onions, thinly sliced fennel, carrot ribbons, olives, some grated hard boiled egg, a bit of celery, and of course, the duck confit. It did have an anchovy vinaigrette, which gave it that taste similar to a Caesar.  All the crunchy earthly flavors were really really good with the salty dressing (and thankfully it was tossed and properly dressed).  Pretty sure I will have a hard time getting hubby not to order this every time (it’s on the dinner menu too). 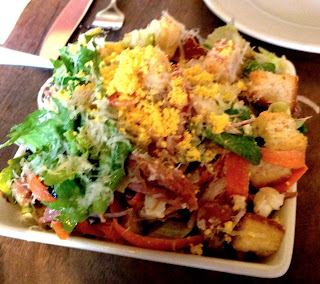 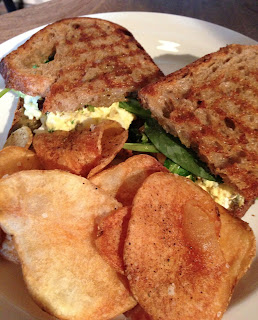 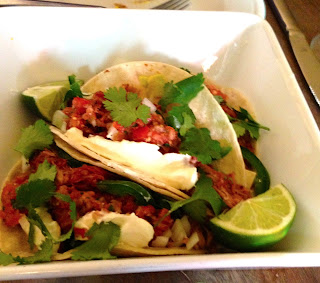 My choice was the egg salad sandwich ($9). Now, I realize that sounds boring, but this is an exceptional egg salad sandwich.  There was the base of the egg salad, and there was also goat cheese, pickled red onions, some greens, capers and bagna cauda (which is a spread or dip that is made with anchovies and garlic).  And all of it was on nice toasty, grilled, hearty slices of Amelia’s bread.  Wow, this is a really, really good sandwich. You have the richness of the egg, the briny flavor from the capers and anchovy, and the slightly tart yet creamy taste from the goat cheese and it is a perfect combination.  All the flavors work really well to balance each other out (and it doesn’t hurt that I love all of these things).  No one taste overwhelmed the others; they were in just the right proportion.  They were served with very crunchy house made potato chips.

We also shared the carnitas tacos ($13)—there were three in a serving. They each had tons of avocado and the carnitas, meat.  There was also salsa, cilantro, a bit of cream and fresh jalapenos with limes on the side.  I have to say, this was our least favorite of the day.  Nothing really wrong with it, but the meat was a little too dry and the flavors just didn’t stand out like the other things.  There was a ton of the meat, and they needed a bit more of the toppings to meld everything together.  There was a lot of avocado, but that was about it.  Also, the limes that came with were really dry—I couldn’t get any juice out of them.  I asked for some new ones that were much better. Once you got a really nice squeeze of the lime juice, they improved a lot.  But this was one item I probably wouldn’t get again just because there are so many other delicious sounding things on the menu. 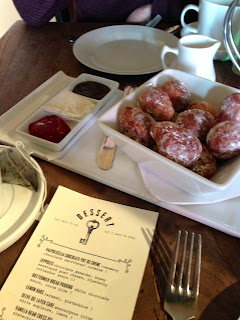 Even though we had really had quite enough to eat, we broke down and ordered dessert.  We had the zeppoles ($10) with some coffee (hubby wanted me to be sure and mention how much he liked the coffee) and tea.  Zeppoles are little fried balls of brioche dough. I guess you could call them Italian doughnut holes.  Wow, they were really delicious (and addicting).  They were really light and super hot.  I really enjoyed the 3 different dipping options they gave you—chocolate ganache, honey goat cheese, and strawberry preserves.  I couldn’t really tell you which I liked best.  And a combo of a couple was good too—I especially liked a little double dip into the goat cheese and the strawberry. Sort of like a really delicious cheesecake.  The portion was quite generous and would be great for sharing for up to 3-4 people.  The zeppoles were great, but the entire Bluebeard dessert menu looks so good.  It is one of the most original dessert menus in Indy I think, and every single thing sounds great.  I would happily eat every one.

As far as I can tell, Bluebeard just keeps growing and improving. Pretty much every visit has been successfully better and better.  Our service was spot on, and the food was very, very good. I can’t wait to see what future visits hold. 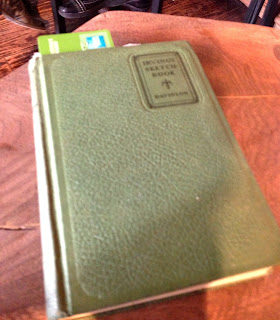 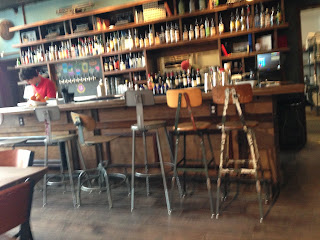