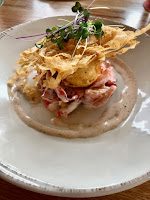 The family and I went in to try the newest Sun King restaurant in the old Three Wiseman spot in Broad Ripple. They have a relationship with Pier 48, which has recently opened a restaurant downtown. This one is called “Offshore.” So you can get a pint of beer and some seafood—they explained it is all flown in daily and is very fresh. There are several non-seafood items as well.

I was torn about what to order because several things looked good, but I ended up settling on the “Rachel Marie” lobster salad ($14.50). Hubby had the “Midnight” Cuban sandwich ($12.50), my son had a bowl of clam chowder ($8) and my daughter and boyfriend the Italian flatbread ($12). 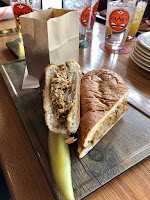 I really liked that lobster salad—it was really unique and interesting. The lobster was super fresh and tossed in a crème fraiche-based dressing with a ring of seasoned dressing around—sort of like a Louie dressing or a remoulade. Then, on top of the pile of lobster was a fried poached egg with all kinds of little fingers of the fried batter making a beautiful presentation. When you cut into the egg it was yolky and delicious. And all the crunchy bits gave great texture. The only thing I would add is a squeeze of lemon (serve it with a grilled lemon would be perfection). This was not a super filling dish, but it was extremely good and extremely well-executed. I would get this again for sure.

Hubby enjoyed their version of the Cuban sandwich. It is made with cider brined pulled pork, bacon, Swiss cheese, pickles, and mustard and it’s all stacked on Leidenheimer bread, which is the classic po boy bread made in New Orleans. It wasn’t your classic flat smashed Cuban sandwich, but it was a really good sandwich. And that bread is delicious, even if not a po boy—light inside with just the right amount of crunch on the outside. I kept sneaking more and more bites. It really grew on me. 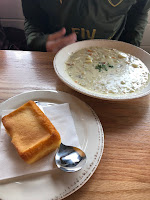 My son had a bowl of clam chowder which comes with cornbread. It’s a full on cream-based soup, but with nice flavor and nice pieces of clam that weren’t all chewy. The cornbread was just ok—maybe would have been more interesting with a nice dollop of soft honey butter or even just some nicely salted soft butter.

My daughter and boyfriend enjoyed the Italian flatbread which had pepperoni, capicola, salami, mozzarella, smoked provolone, and lemon ricotta. An interesting variation on a classic combo of flavors. They liked the soft crust. I am guessing there are still pizza ovens in there from 3 Wiseman, and it is a good use of the equipment. Regardless, they did well with it. Flatbreads always make me wary, but this was good and they have some interesting toppings. They also had some fruity non-alcoholic drinks that they really enjoyed.

We also shared an order of whoopie pies ($5). They were simple, but I liked the marshmallow butter cream. The sandwich part was nice and soft as well.

All in all, I find this menu interesting and the ingredients are all high quality and they clearly know how to not screw up seafood. Would love to try the fish and chips as well as the lobster roll. It’s not cheap, and I wish there were a few more wine choices (not much of a beer drinker), but I will take it. I am looking forward to a second trip. What do you guys think?