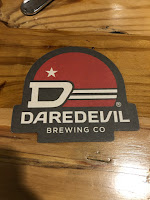 Recently we were stuck without a reservation on a Saturday evening due to the uncertainty that comes from tennis tournaments and we thought we could maybe get into Daredevil and we were right. There was a pleasant crowd but there was still space, and although there were a number of us, we got one of the tables with chairs and not the benches, so all was good.

We started with some pork rinds ($5) and hot pretzels ($7).  We were actually very pleased with both. The pork rind platter was quite generous and we were glad to have 5 people eating form it, and we still didn’t eat them all. They are fried pork skins, and they drizzle them with a molasses sauce, which is a bit sweet. I was undecided how I felt about this sweetness, but decided it was pretty good. I might have preferred something more savory, but I appreciate the creativity. They were just the right amount of light and crunchy.

The pretzels were also good—they are covered with brown butter and lemon and sea salt and served with hot beer cheese. They were a little more unusual than your average soft restaurant pretzel, and they were good with the beer cheese—which I only wish was a little sharper. Hubby enjoyed dipping the pork rinds into the beer cheese.  Overall, everyone really liked both apps. 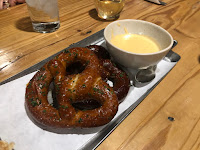 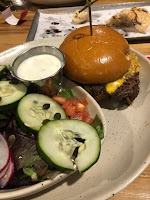 Several of us went with the smash burgers—I had the single hall burger ($10.50). Several others had them as doubles ($12.50) or singles. I like the smash-style patty even though it’s not super thin—but it is a tasty burger. If you get it the way it comes, it has lettuce, tomato, pickles, onion, remoulade and American cheese. That’s how I got mine. Other than the tomato, the toppings were good. I like the remoulade on it—I like burgers with a special sauce. It is cooked just right and was excellent. Everyone with a burger was very happy. It’s one of the better burgers in town. I had mine with a side salad, which was fine. The fries here are the only thing I find a little disappointing because I just want them to be hotter, saltier, and crispier. 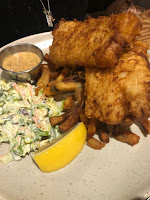 My mother-in-law had the midwest fish fry ($18) which is beer battered cod (12 ounces of cod—it’s a good size) served with fries. Usually it comes with tartar sauce, but she subbed it out for remoulade. This fish is very, very good. It was a favorite at the table. I think hubby ate almost as much of it as she did. The fish was tender and juicy and the breading light and crisp. 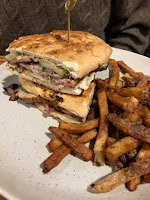 Hubby had the special sandwich of the month, which looks like it is on the regular menu now—the Cuban ($13). It was a tasty sandwich, but not quite as good as everything else. It is smoked pork loin and ham topped with Swiss cheese, picked and mustard on a pressed hoagie roll. Maybe because the pickles have a lighter pickle to them, they don’t stand out on the sandwich as much as I like them to with a Cuban? I am not sure. It was definitely a good sandwich, just not quite as good as the burgers and fish.

Oh, and I didn’t know that they even had dessert but one of the choices was little fried balls of bread pudding with caramel and chocolate dipping sauce. These were so dang good for some reason. Seriously, do yourself a favor and give them a try. Soft inside, but crunchy outside. Strangely addictive. 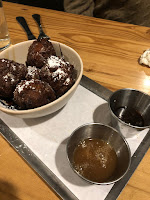 Anyhow, from top to bottom, this meal was great. The service was on, the room was the right temperature and we could hear each other talking (the live music they have sometimes can be a little overpowering in the room). And the food was very tasty. A good standby in our neighborhood and I am glad to see the menu get mixed up and improved as they figure it out.