If you haven’t heard about Common House, it’s a pop-up supper club run by Alan and Audra Sternberg (he was formerly the chef at Cerulean and the founding chef at Field Brewing). Recently they started doing these pop ups (usually at Ukiyo as far as I can tell) and some friends asked us to go. The menu looked good and we bought tickets. If you call it “Simply Summer,” I will have a hard time passing that by. The entire dinner cost about $90 per person (drinks additional). 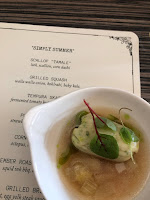 The first three courses were amazing. Truly. First was a scallop “tamale,” This was so tasty, it was basically a scallop mixture with whole chunks of scallop that was cooked like a tamale (steamed in a corn husk). Loved the texture of this and the delicate flavor, but also the broth underneath with leeks, scallions and corn dashi. This was unique and it was really good. 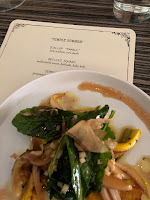 Next came grilled squash salad, which if I am honest, was the one I was least excited about, but which turned out to be one of my favorites for sure. There were various types of squash that was lightly cooked with sweet onions and then tossed in a slightly acidic fish sauce-based sauce—at least that’s how I remember it. It was so good—just the right amount of umami. I loved this one.

The third course was tempura skate wing sitting in a tomato butter with powdered ramp powder. I love skate—truly love it. Skate is the wing of a type of ray in case you haven’t had it before. This was the first time I have had it tempura battered and it was fantastic. Super light and crispy. Clearly a great way to do skate. 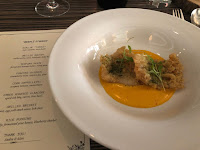 The next course was poached chicken with a strawberry miso side, with chicken fat and pine. This one was good but didn’t stand out the way the first courses had. I liked the crispy edge to the chicken though. I also liked the corn stuffed pasta for the next course with octopus slices and tomato, even though by this point, I was getting full and pasta was a tough one! 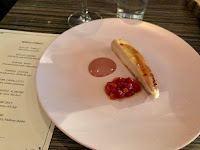 The next one lost me. I love tuna, but this “ember roasted” albacore with squid ink bbq, carrot and Thai basil wasn’t doing it for me. The preparation of the fish was such that it had a sort of caramelized crust on top, but the fish got so tough that you could really barely cut it. The last savory course was brisket with egg yolk steak sauce and bok choy. Honestly, but this time I was just purely stuffed. I had a bite or two but had to throw in the towel. I did like that sauce though. 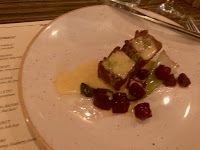 The dessert was interesting, but again, I just tasted it because I was so full at this point. It was rice pudding with honeycomb candy, fermented pine honey, and blueberry sherbet. Interesting flavors and I really liked the texture variation from the light, but crunchy honeycomb in the creamy rest of the dessert. 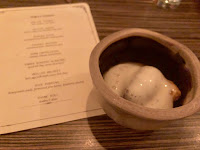 Overall, I thoroughly enjoyed this meal. Would I prefer maybe a 4-5 course meal next time? Yes.  I was losing steam toward the end. But I would definitely do a next time. I hope to see a restaurant in this couple’s future. 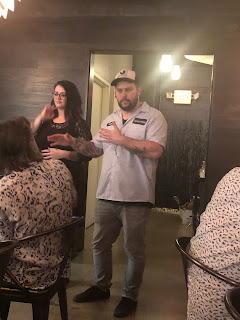