A few weeks ago I took my daughter and her boyfriend to Detroit to see Ben Platt perform—who they are both obsessed with. Anyhow, I was excited to take the opportunity to check out some restaurants in Detroit, since I have never been there other than in the airport. 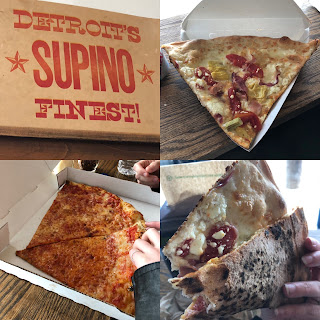 The first day we grabbed a slice of pizza from Supino Pizzeria. There was over an hour wait so we grabbed a slice to go instead and sort of ate it on the fly. They only offer a couple of choices by the slice to go, but we were all happy—they had a slice of cheese each ($2.75) and I had the special slice of the day with artichokes, pancetta, onions and feta ($3.75). These are huge foldable slices with crispy crust, but just soft enough to be able to fold it. I really liked the crust here and the toppings for the day’s special were perfect for me—being someone who appreciates mostly veggies on my pizza. I would certainly be frequenting this place if I were from Detroit. And it raises the question about why good NY style pizza is such a challenge in central Indianapolis. Anyway, let’s move on. 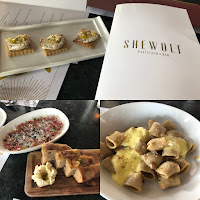 Before the concert, we had dinner at Shewolf. We had not been able to get a reservation a few weeks in advance but were advised they have a large bar that is walk in and that’s what we did. We arrived right when they were opening and were seated right away (it got crowded really fast though). This is “modern Roman” restaurant and seems to be hugely popular. They make several types of pasta in house. My daughter’s boyfriend sort of let us order everything and we all shared. We started with a little freebie amuse bouche of a homemade cracker with a fairly light cheese spread. These were great. Next, we ordered the Lombardia focaccia ($6) and the carpaccio ($14). The focaccia was really good.  It had a whipped gorgonzola spread on the side, that had just a kick of blue cheese, but wasn’t too overwhelming for people who don’t love blue cheese (as I do). The focaccia had potato and rosemary on it. It was very well done and we all wished we had more. We also had the carpaccio, which I was torn on flavor-wise. The beef was really tender and good, but there was almost too much going on for me. There was hazelnuts, capers and Parmigiano, as well as a Nebbiolo dressing (a light red wine vinaigrette). I think the nuts may have been the set me over the top. I liked it, but it was almost too busy. 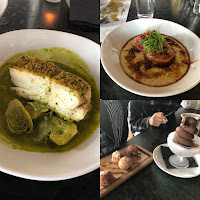 For dinner we split several items. The favorites were the rabbit roulade on polenta and the halibut with herbed breadcrumbs and artichokes. My daughter’s boyfriend had never had rabbit and described it as tasting like “chicken, but really good!” Both of these dishes were extremely well prepared and were seasoned with fun interesting flavors. The one let down I thought was the Roman pasta carbonara ($18). I was surprised at the shape of the pasta—large rings. They were a little al dente for me, and the “sauce” was more like a dollop of cream. I just didn’t feel the carbonara aspect of the sauce—it was too gloopy for me. And the bits of black pepper were too large and dominated the flavor. The desserts were great—they had little fried Italian doughnuts (zeppole) ($9) and this giant dish of dark chocolate gelato ($9). Both great but even better together. The doughnuts were ricotta based and covered in salted caramel sauce. So good. All in all this was a fun restaurant and had some great flavor combos for sure. I would love to try some other menu items. 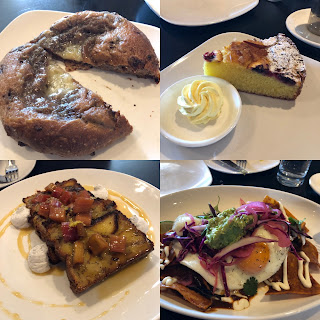 On our way out of town, we just had time for a brunch and we checked out Selden Standard. They serve lunch and dinner every day, but brunch on the weekend. The kids wanted the morning pastries ($5 each)—one was a chocolate cherry pastry and one was a blood orange cake. The kids really liked the cake. The chocolate pastry was good as well—very rich and chocolatey with some large chunks of cherries in it. I had their version of chilaquiles ($12), which were good, but I wished the chips were a little more integrated into the dish. The flavors were good—I liked the dark almost mole like sauce—it just all felt like it sat on top of the chips rather than being a part of the dish, which is my preference. The kids shared yet another sweet dish—the lemon poppy seed French toast ($12) which was actually really good. And I liked the way the chunks of rhubarb on top added a tartness. It also had lavender cream and almond. All in all, this was a really interesting menu (that changes frequently) and they do a nice job. Again, another place I would be interested in trying multiple times and check out seasonal menu items.

Have you guys ever spent time in Detroit? Eaten anywhere good? 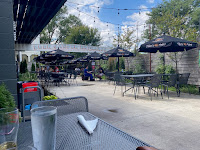