Recently I found myself in Brownsburg at lunch time, and this is not an area I am familiar with, so I took to the twitterverse and asked for help. I got several good recommendations, but settled on Thai Basil, as recommended by @thejoeball. There were actually several spots that were tempting, which I was surprised by, but Thai food sounded good. 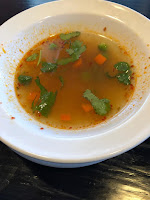 It’s a cute little place with table service—although for some reason, it took quite a while to place my order and get my drink. They were decently busy, but not super busy. But eventually I put my order in for my very favorite Thai dish—the sautéed eggplant with chicken. Here they call it “Tasty Eggplant” ($11.99). They have a bunch of lunch specials that run $8.99 and come with soup and an eggroll, but no tasty eggplant on the lunch menu, so I just ordered off the dinner menu.

They first brought me a small bowl of Tom Yum soup—it had a great lemongrass flavor and a hit of spiciness from red chili. There were some hunks of carrot and some fresh cilantro on top. I really liked it and had a hard time not eating every last drop. It did have a spicy kick to it.

When the tasty eggplant came out, the first thing I noticed was how much like a rainbow it looked when they placed the dish in front of me—the purple eggplant, red bell peppers, green bell peppers, and orange carrots. There were also big leaves of basil mixed in. The other thing I noticed with my first bite is that it was smoking hot! Not spicy, but temperature-wise. It was crazy how hot it was. I had to let each bite cool before I could eat it—but when I did eat it, it was delicious. The chicken was nice and tender, and the sauce had a lot of flavor from the basil and the gingery brown sauce.  Again, I had a hard time not eating all of it, but trying to be somewhat healthy, I restrained myself. The veggies were crisp but tender and I love the way eggplant soaks up all the flavor in the stir fry. 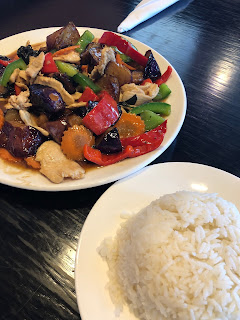 All in all, this was a tasty lunch and if this were my town, I would probably put it in the rotation and try some other things as well.  All you Brownsburg, folks, what do you think? And what are your favorite places?