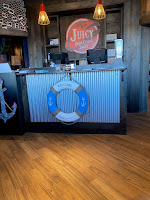 Well, about 9,834 days ago, before quarantine, the family and I finally got up the nerve to go try one of the “Juicy” places that are popping up all around us—seriously there are at least 3 in a 3-mile radius of my house. Trying to decide which one to try, I was looking online and ended up letting health department grades make the choice. We went to the one that is in the old Squealer’s in Castleton—officially Juicy Seafood Indy. 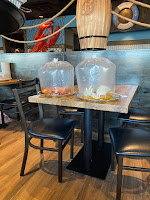 So here’s the deal with the whole “Juicy” thing (because I honestly had no idea what to expect other than crab. So the schtick is they service your choice of various shellfish in a giant plastic bag filled with several choices of spiciness and well as several choices of seasonings—the choices are lemon pepper, garlic butter, Cajun and juicy special (which is all three mixed together). Each bag comes with potatoes and an ear of corn. You can add 2 boiled eggs or ½ pound of sausage to a bag for $1.75.

They have a bunch of combos if you want a variety of seafood (or you could easily share). Dungeness crab will always be my most favorite shellfish (that and soft-shell crab) so when I saw that, I knew that’s what I was going to get. It is the most expensive except for the three-lobster tail dinner at $30, but Dungeness is just better. So you get basically a whole crab’s worth of legs, and the crab itself was good. I had no problems with the quality of the crab. I had the lemon butter seasoning and low spice level. The taste of the seasoning wasn’t bad, but it was pretty much flavored oil so it was pretty greasy feeling even though it wasn’t fried. I think if I went again—and it’s possible we might—I would just ask for some of the dry seasonings and have it steamed in the bag with some extra lemons. Maybe just a little “garlic butter” to dip in.  The corn was pretty inedible to me—super squishy—but that’s pretty much to be expected. The potatoes were boiled potatoes. They were fine. Anyhow, when they serve it to you, they shake it all up before serving it to you. 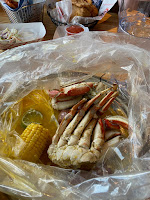 Hubby also got one of the combo  bags—his was filled with a lobster tails, some shrimp with heads on (you can do either on or off) and crawfish (about $30)--and he added sausage. The crawfish was not good and the shrimp and lobster were fine. He actually really enjoyed the sausage though. He had the Cajun seasoning. Overall, he liked mine better—both the seafood and the seasoning. I think he would be happy to share some Dungeness and add some sausage. 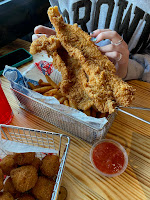 The kids went for the fried side of the menu, which seemed like a bad choice—but as it turned out, most of it wasn’t bad. They did share some of ours too. My daughter had the fried whitefish basket ($11) and my son the fried shrimp and tilapia combo ($12). We also had some buffalo wings ($6) and hush puppies ($3.50) for starters. (My son is on a buffalo wing kick right now and orders them most places that offer them). My daughter’s fish had bones that were a bit of a turn off, but my son enjoyed his fried platter and the wings. I’d say the hush puppies were underwhelming. My son said his wasn’t as good as my crab, but he said he would eat it again if he got some crab too. 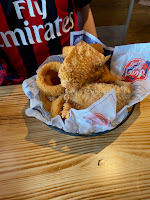 So the whole atmosphere of this place is interesting—as noted, the big bags have a fair amount of “sauce” and are quite messy, they give you bibs and rubber gloves to eat your food with. A bit of foreshadowing I guess. And I guess you don’t have to worry about too many people touching your food since it’s in a plastic bag. My daughter was somewhat disturbed by the negative environmental impact of so many giant plastic bags coming out of the kitchen, and I can’t say I don’t agree. I do like knowing there’s a place to get Dungeness crab out, as it’s not something you see a lot of places. I think everyone would go back, but I am not sure how soon it will happen. 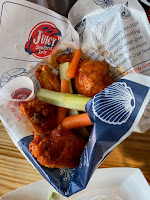 Décor-wise, it’s like a cross between Joe’s Crabshack and Red Lobster. Also, on a Sunday, it was packed. We had to wait. I think they were short a few servers too because service was a little spotty and a little slow, even though our server was really nice and helpful with ordering. 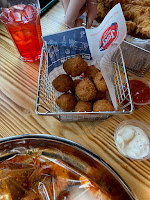 Anyway, I am wondering if you do pick up from them, if they just give you the giant poofy plastic bag…