A friend was in town recently and we had a quick dinner at Louie’s in Broad Ripple. I have only had dinner there once and was interested to try it again. I appreciate the fact that it’s an adult-ish kind of option in Broad Ripple and has an interesting wine list. I like the interior, even though it tends to be a little cold in the winter with all those windows. Our server was very nice as well. The place wasn’t very busy, but it was a Monday, so hopefully that’s why. 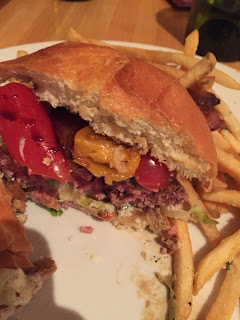 I ordered the burger (they call it the “gourmet Sinatra burger) ($13) because I was just feeling that burger call. So it’s a thick burger, but they cooked it just as I ordered—nice and pink inside. They top the burger with some interesting things. There’s cheddar and bacon, but also balsamic, green goddess dressing, and heirloom tomatoes. I didn’t think I would like the tomatoes on there, but honestly, it was all really good together. And the balsamic really added a ncie touch. And so did the green goddess. They used a brioche bun, which was soft and delicisous. I have to say, it’s one of the better thick burgers I’ve had since my last Room Four burger. It’s not just a good burger, but has just the right amount of extra stuff to make it somewhat exceptional. They bacon was delicious too. Just the way I really like it-really salty and flavorful but also really crisp so it would practically shatter when you ate it.

The burger came with fries, and they are the thin, crispy type. In theory, I like this type of fry a lot, but these were strangely cold as soon as they were served. Not sure what happened here, but the timing was just a bit off. Would love to get a batch fresh out of the fry-o-later though. I did get some of the green goddess to dip in, and I recommend it.

All in all, I would happily eat this burger again when I am in the mood for a fat burger. What’s your favorite burger these days?