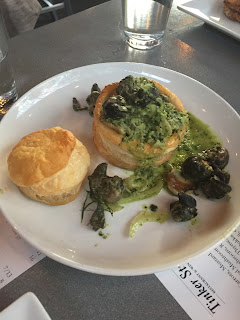 I wasn’t even going to write about this meal, but I had such a good one, I figured I would share. We were with friends who had never been to Tinker Street--we started with a couple of different appetizers to share. One was a special that was meant to split between two people—it was actually a bison tenderloin with roasted mushrooms. It was an interesting choice to serve as an appetizer—I guess because it was on the small side, they thought maybe it wasn’t quite big enough for a main dish, but it would have been just right for me. We all really enjoyed it. I particularly thought the mushrooms were really nice. Roasted just right.

We also shared the escargot vol-au-vent ($13), which was puff pastry with an herb garlic sauce and several escargot (snails). One friend had never had them before and wanted to try it. Hubby was thrilled because he loves escargot.  These were very good. My biggest problem with escargot is that sometimes they are kind of rubbery, but these were not at all. They were a good size and very tender. And who doesn’t love puff pastry right? The sauce was nice and flavorful as well (which has been a problem for me with some dishes at Tinker in the past, that they were bland). This was nicely done. 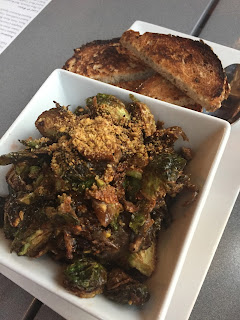 Finally we shared the fried Brussels sprouts ($11). These were rich and very tasty with just a light crisp edge. They were tossed with a Dijon vinaigrette and topped with almond dukkah, which is a mixture of herbs, spices and ground up nuts (almonds here). I really liked the extra texture from this mix and the additional flavor that it added. I love nuts mixed into a salad or with vegetables to give it a little more heartiness.

For his main, hubby had the wild coho salmon with parsnips, creamed swiss chard and a miso glaze ($22). It was a great dish as well. It’s nice seeing the shift into slightly more wintery veggies being served with salmon, but still showing creativity. Both the chard and the parsnips were very good, and the fish was perfectly cooked medium rare. 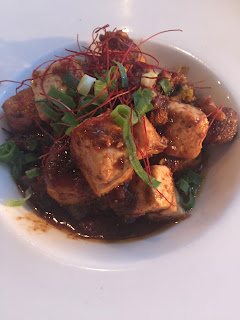 But the best thing on the table for me was the dish I ordered for my main, which was actually a starter. It was the mapo tofu dish ($12). There were large chunks of tofu, pieces of rice cakes (not the flavorless dry diet things you think of, think of like a crab cake made with rice), lion’s mane mushrooms and fermented beans. The sauce is a ginger and soy based sauce with a fair amount of chili in it, as well as those fermented black beans. It had some heat for sure, but also I just loved all the soft but varying textures from the tofu, the mushrooms and the firm, yet slightly chewy rice cakes. I really liked this dish. Hubby agreed. We licked the bowl clean.

I think our friends enjoyed their first visit—one is a vegetarian (who sometimes eats fish) and she appreciated the many offerings they had on the menu. Hubby and I were happy that everything was so good. We’ve had some ups and downs here, but this one was a definitely up meal and everything we had was very enjoyable. If they have that tofu though, get it. I am going to have to try a version of my own at home.