I have been bad lately about getting to some new places for lunch—things just get so busy this time of year! And honestly, I have just been in a mood lately for comfort food and places when I go out for lunch, so I have been hitting a lot of usuals. But I finally managed to get somewhere new the other day with the BFF. We went over to Broad Ripple and ate at the Canal Bistro.

I was pretty happy with this place—there were some hits and some misses, but all around I would put it on the repeat list. I had the mazza plate appetizer sampler for my lunch so I could try lots of things (you know I love to do that). It had hummus, tabouli, spinach pies (i.e. spanikopita), a 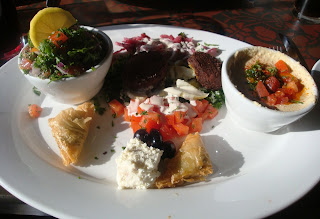 couple of falafel and various marinated and non-marinated veggie garnishes and olives.

The things I liked about this plate the most were the hummus and the spinach pies. The hummus was not too thick and not too thin—a pleasant consistency that was thin enough you could dip straight in with your pita, but not so watery that it didn’t have the heft that hummus should have. I liked the seasoned olive oil on top with a few diced tomatoes as well. I love a bit of olive oil on top of hummus, adds a nice richness.

I also really liked the little spinach pies. They were very little triangles of the phyllo stuffed with feta and spinach. I think I have told you all how much I love these little crispy things before, and these were certainly great ones. The fillings were still moist and the phyllo was pleasantly browned and appropriately crunchy. Next time I would certainly get an order of just these. They were yummy—and there were only two on the sampler and I wanted more for sure.

The tabouli I wasn’t as impressed with. The flavors were very fresh, the herbs obviously very fresh, and there was a fair amount of lemon. But there was so little of the cracked bulgar wheat that it seemed like a Mediterranean pico di gallo almost. Not bad to slap on top of some other things, but alone, just couldn’t spoon it directly into my mouth.

I thought the falafel was pretty dry and didn’t have a lot of flavor. But then again, I think that about falafel in general. These were a little over fried maybe and even mixed with some of the other things and sauces on the plate; I just didn’t see the appeal.

Loved the olives (big surprise) and I love mixing an olive with just about any bite of the other stuff. And in fact, my friend had the restaurant’s version of a grilled cheese which was grilled feta 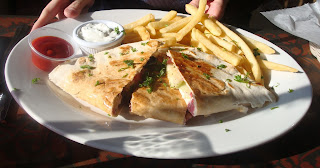 with olives, cucumbers, tomatoes and other seasonings on pita. She gave me a piece of it (quite a generous portion) and it was very tasty. I would order that again as well. Actually, there are a lot of good sounding entrées on the menu that I would like to try for dinner, but for lunch they seemed too big. I will certainly go back and give them a try one of these days.

The servers were super friendly and the food was pretty fast. The chairs are a bit uncomfortable (don’t tell hubby or I’ll never get him in there for dinner). But a pleasant experience for sure.